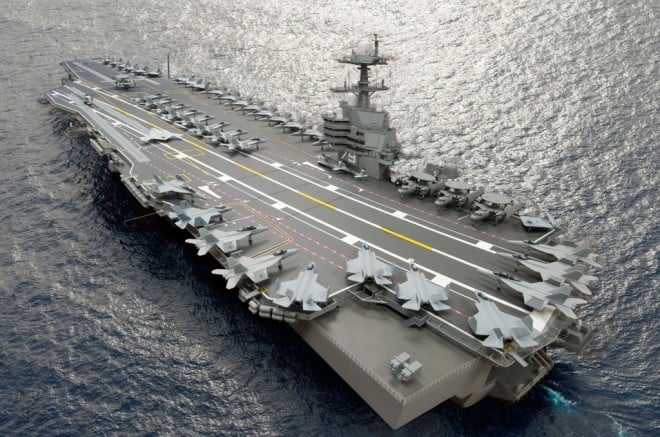 The head of the U.S. Navy’s aircraft carrier program offered a mea culpa for cost overruns on the service’s new Gerald R. Ford (CVN-78) nuclear carrier class in a Tuesday briefing with reporters.

“Nobody will tell you we’re satisfied with the cost performance. There’s a litany of reasons why we have those cost challenges but we believe we have those under control,” said Rear Adm. Thomas Moore, program executive officer for carriers for Naval Sea Systems Command (NAVSEA).
“The original contract was signed at $10.5 billion total and we’re now expected to come in at $12.9 billion.”

Cost over runs on the Ford have been the subject of intense security from Congress and the Government Accountability Office (GAO) in addition to developmental delays in key new technologies slated for the carrier. Congress has imposed a $11.4 billion cost cap on the next ship in the class.

But now with Ford almost 70 percent completed, Moore said the construction lessons would be best applied to the next ship — John F. Kennedy (CVN-79).

Moore said the program estimates it can reduce the construction costs for Kennedy by $1.2 billion.

Despite cost overruns, the Fords are built to ultimately save the Navy money over the 94 years the ships will be in service.

Fords are designed with a high degree of automation to drive down the cost of personnel on this ships that account for about 40 percent of the operations and maintenance over the life of each hull, Moore said.

Though the final crew numbers have not been finalized, NAVSEA hopes to shed 900 to 1,200 sailors from the ship’s company and the air wing compared to 6,000 sailors aboard a current Nimitz-class (CVN-68).

“That’s a cost savings of about $4 billion dollars over the life of the ship,” Moore said.

Other costs savings will come from the ability of the ship to operate longer without depot maintenance availabilities. Currently Nimitz carriers need a depot repair every 32 months. Fords will go 42 months between depot availabilities.

“The Nimitz can give you up to 120 sorties a day sustained over 30 days. Ford can get you 160. Sortie generation rate for aircraft carriers is really our measure of combat capability,” Moore said.
“It’s because we really redesigned the flight deck in a way that we can turn that plane around quicker. One of the things we did was talk to NASCAR and asked them ‘How do you get your cars turned so quickly?’ and learned some things from them.”

Fords have three times more electrical power than current Nimitz carriers at 104 MW. The extra power could be a boon to future defensive weapon systems on the carrier.

“It’s not hard to imagine we could take all of [current systems] off and have the carrier set up with a ring of lasers or other directed energy weapons to provide a self defense capability for the ship,” Moore said.

The Navy plans to christen Ford on Saturday and then move the ship from the graving dock at Newport News Shipbuilding to finish the rest of the work pier side.

Following construction, the Ford will begin 27 months of testing ahead of a planned commissioning in 2016.