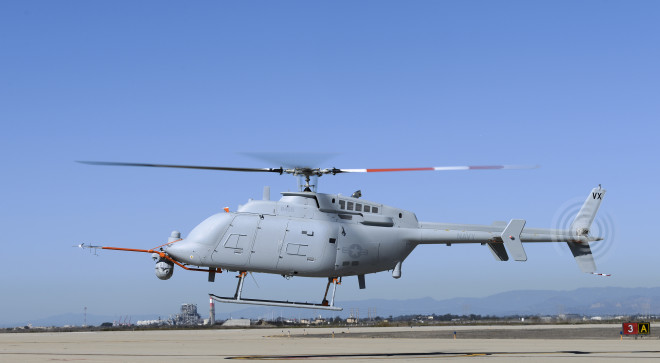 The Navy’s next generation rotary-wing unmanned aerial vehicle (UAV) had its first flight on Thursday at Naval Base Ventura County at Point Mugu, Calif., according to a statement from the service.

The Northrop Grumman MQ-8C Fire Scout had an initial short seven-minute flight to test its control systems and then a second flight that flew a pattern around the airfield reaching a height of 500 feet before landing again.

The MQ-8C is the next step in the Navy’s development of helicopter UAVs for deployment on ships and for special operations forces (SOF) application.

“It is a big accomplishment for the integrated government and industry team to fly this air vehicle for the first time,” Capt. Patrick Smith, Fire Scout program manager at Patuxent River, Md. “MQ-8C will require fewer aircraft [than the MQ-8B] to operate at maximum performance and will meet the U.S. Africa and Special Operation Commands urgent needs requirement.”

In 2012, Northrop won a $262.3 million contract to provide the Navy with the two test vehicles and six destined for operational use. In April, it one a second $71 million award for six additional aircraft for a total of 14.

The MQ-8C is based on the Bell-Textron Bell 407 commercial helicopter, built in Mirabel, Quebec, and extensively modified at a Northrop Grumman facility in Alabama.

The upgrade extends the range and payload of the Fire Scout. MQ-8Bs have a maximum speed of 100 kts with a range of 618 nautical miles and an eight-hour endurance time.

The MQ-8C variant will extend the time in the air to twelve hours, a there-and-back range of about 1,200 nautical miles and the ability to conduct an orbit around a ship of up to 150 nautical miles.

The MQ-8C operates with the same set of ground controls, sensors and 97 percent of the same software as the MQ-8B, according to Northrop.