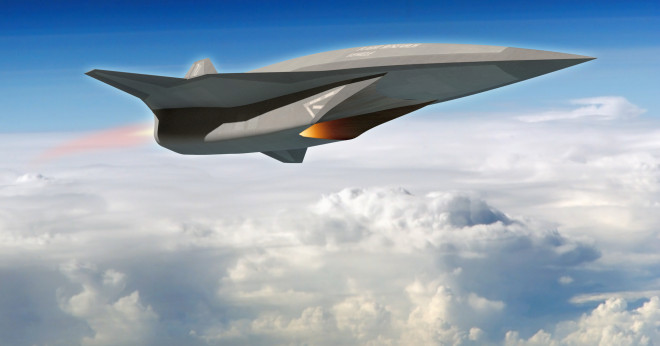 However images of the aircraft were seen on Flightglobal’s DEW Line blog in July, when the company released a video celebrating the Skunk Works’ achievements over the past several decades.
As impressive as the SR-72 concept is, one of the questions that immediately arise is: Does the Department of Defense have a requirement for this kind of aircraft?

There too, the answer could be yes.

“I am personally of the belief that we will need some kind of penetrating air ISR,” Kehler had told the Defense Writers Group in Washington, D.C. “What that looks like, and how much of it and the nature of it, remains to be seen.”

The SR-72, which is really many ways a rehash of the Defense Advanced Research Projects Agency’s Blackswift demonstrator program, could potentially fit the bill.

If the SR-72, which is envisioned to cruise at speeds above Mach 6, could eventually be developed into an operational aircraft, it would be able to overfly areas that are all but off-limits to even a supersonic stealth aircraft.

According to Aviation Week, “the SR-72 is designed to fill what are perceived by defense planners as growing gaps in coverage of fast-reaction intelligence by the plethora of satellites, subsonic manned and unmanned platforms meant to replace the SR-71.”

That means that should the Pentagon—in this case the U.S. Air Force—somehow manage to find the money to pay for the SR-72, Kehler could have his penetrating ISR platform.

That platform could then be used to gather ISR data from deep inside hostile territory with all but impunity while relaying that data back to the analysts back at a Distributed Common Ground System station. It could also hit heavily defended targets before they have any chance to react. If the concept works, it could play an integral role in the Defense Department’s Air Sea Battle concept.

But before any of that, the SR-72 has a long way to go both technologically and in securing the some of the Pentagon’s dwindling supply of cash.