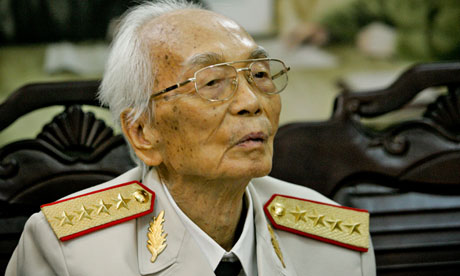 The architect behind the 1954 North Vietnamese victory over the French at Dien Bien Phu was a “a dedicated killer determined to take absolute power by assassinating as many of his political opponents as possible,” Rufus Phillips, a former U.S. military advisor to Vietnam told USNI News on Saturday.

General Vo Nguyen Giap — who died in a Vietnamese military hospital on Friday at age 102 — led the People’s Army of North Vietnam through the communist fight against the French and later American forces.

Phillips — who arrived in Vietnam as a military advisor in 1954 — told USNI News that Giap’s iconic victory against the French relied substantially on the assistance of the Chinese.

“He could not have won without Chinese Communist advice and logistical and combat support, particularly with artillery,” Phillips, author of “Why Vietnam Matters,” said.

Giap was born in 1911 in a rural village just north of what would become the Vietnam’s dividing Demilitarized Zone. He rose to power as a so-called self-taught general and had a reputation for ruthlessness.

“One of the first Vietnamese I met in Saigon in 1954 had been a political activist in the North in the Viet Nam Quoc Dan Dang (VNQDD), the largest Vietnamese political party in 1946. He recalled vividly having just missed a party meeting which had been raided by one of Giap’s death squads. The VNQDD members were bound, sewn up alive in sacks with rocks and dumped into the Red River,” Phillips said.
“This was my introduction to who Giap was.”

Giap was also known for orchestrating the deadly 1968 Tet Offensive, in which more than 45,000 of his troops died in a series of wide-ranging across the country.

“Giap was callous,” U.S. Gen. William Westmoreland said in 1968.
“Had any American general taken such losses, he wouldn’t have lasted three weeks.”

Following the war, Giap lived as a national hero in Hanoi until his death.

“He seems to have mellowed long after the war, but while he fought it he was as ruthless as Mao and Stalin,” Phillips said.