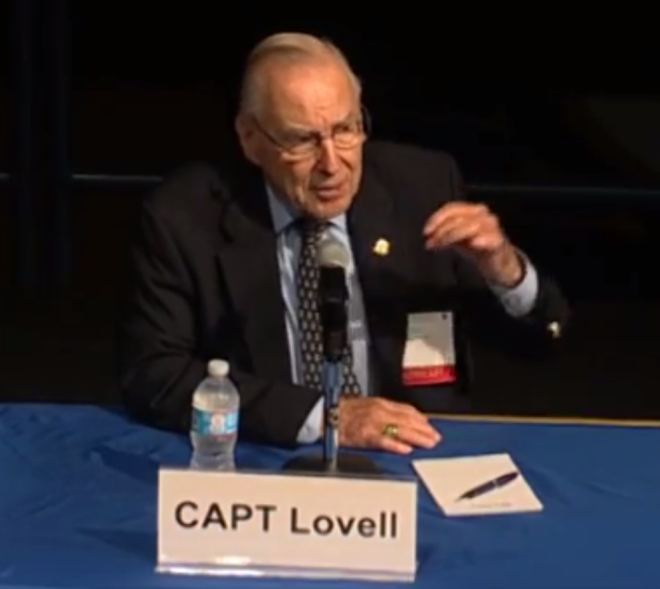 The focus of the conference’s first panel session was a review of how the US space program developed from the first tentative steps of the Mercury days to where we are now.

David Hartman opened the discussion with Gemini and Apollo astronaut Capt. James A. Lovell, USN (Ret.). He asked Lovell to describe the early selecting and testing procedures for astronauts. “Eisenhower wanted people with security clearance,” recalled Lovell. “Our initial approach to space was as a research and development program, and test pilots are familiar with that kind of mission.” The original astronauts had to have an engineering degree, had to have several thousand hours’ jet flying experience, and couldn’t be over 35 or over six feet tall. At the Lovelace Clinic in Albuquerque, New Mexico, the astronaut candidates were subjected to a wide battery of tests that had little do to with determining their fitness, but rather tested their stamina and responses to unusual stimuli. “They took liquids from every orifice we had,” said Lovell. Although he wasn’t picked for the first astronaut group, he was selected as part of the second group along with Thomas Stafford.

Asked how optimistic he was about the success of Gemini, Lovell explained that the overriding question was whether humans could live for two weeks in zero gravity. “Some of the doctors did not think that we could,” said Lovell. “They said, ‘didn’t we evolve under gravity? Don’t we need it to survive?’ Well, of course, it turns out that we didn’t. Two weeks in space was a long time, but I’ll tell you, two weeks anywhere with Frank Borman is a long time,” quipped Lovell.

Lovell said that later Gemini missions benefitted from Ed White’s experience, but added that there were still some surprises waiting for the later astronauts. “What we all forgot about was Newton’s Third Law of Motion. When you touched the spacecraft, it would repel you. You had to learn how to use zero-gee to your advantage rather than to your disadvantage.” It was only later that NASA engineers devised the idea of practicing spacewalks in a neutral-buoyany pool.

Asked whether the decision to send Apollo 8 to the moon was a political decision, Lovell responded, “Most of the changes to the mission were political. Two things happened in the summer of 1968 that really changed our mission. The first was that Grumman Aircraft, which was building the lunar module, said that there was no way they would be able to get it ready by our mission. The second thing was that we had intelligence that the Russians were going to put a man around the moon in the late fall of 1968.” The Soviets did in fact launch several Zond missions on circumlunar missions carrying animals, but never launched a Zond mission with a human occupant.

Lovell recalled that seeing the earth rise over the moon was the highlight of the Apollo 8 mission. “It really gave you an impression of how small we all really are,” he said. “You see continents and clouds and water, but that’s it. From that distance it appears that the earth is completely uninhabited, but you know that down there there are 5 or 6 billion astronauts striving to survive on the spacecraft called Earth. And I think that’s the sense we wanted to bring back to people.”

Asked whether he agreed with those who at the time called Apollo 13 a failure, Lovell said, “When I got back, I thought it was a failure too. You have to remember that NASA lives on success, so after the initial euphoria of returning, there was no large amount of telegrams that came in, no medals or things like that at all, so it looked and felt like a failure. But then after a while, we started to think about. it. Yes, it was a failure in that it didn’t accomplish what it set out to do, but it was a success in terms of what all the people, the ground crew had to work with and overcome to bring us home.”

Lovell concluded his remarks by offering his thoughts on the future of manned space flight. “I haven’t been close to the recent progress in commercial flights, but it appears to me that whatever you do in space, the idea of the US having a lead is important,” said Lovell. “Ever since 1957, young people have had a real affinity for what they see the space program development. When I gave my Forrestal lecture at the Naval Academy in 1973 and people said, ‘Gee, I want to do that,” back then they could. But we don’t have that now. We’re like a ship without a rudder.” Lovell singled out the Curiosity lander program as an example of what can be accomplished. “That was a marvelous technological and engineering feat. If we could put that same effort into manned spaceflight, I think that would be very important for the future of the country.”

The next speaker on the panel was Capt. Robert L. Crippen, USN (Ret.), a veteran of four space shuttle flights and former President of Thiokol Propulsion and director of NASA’s John F. Kennedy Space Center. Crippen’s first astronaut assignment was the Air Force’s Manned Orbiting Laboratory (MOL), which was canceled before Crippen had a chance to fly in space. However, he eventually joined the nascent Space Shuttle team. “The experience [of being selected for the Space Shuttle] was really rewarding, actually. Deke Slayton said, ‘I have a lot of work for you to do.’” He did not expect to be picked to fly on the first shuttle mission, STS-1. “John Young was the head of the Astronaut Office at that time, so I knew he would probably be on the first flight, but with someone other than me,” said Crippen. “I thought I would get an early flight, but I didn’t think that I would get the first one. If you’re a rookie, you’d like to go with someone who knows what they’re doing, so I was lucky to fly with John.”

Crippen has been watching the waxing and waning of the US manned space program’s fortunes and expressed concern over the lack of an explicit focus for the future. “When Constellation was cancelled, I was pretty chagrined that we had taken away the moon mission. The question is, what mission do we do next? Right now NASA is working on the asteroid retrieval mission that has some benefits. The biggest benefit is that it gives us something to work toward. It’s hard to build something that did not have a specific mission.”

Col. Robert Cabana, USMC (Ret.), the current director of NASA’s John F. Kennedy Space Center, was the next to speak. He briefly recounted the highlights of his four shuttle missions, and explained that his third mission — STS-65, which flew for 14 days in July 1994, set the standard for missions on the International Space Station (ISS). He recalls that, at the time, the shuttle program was at its peak and it was proving difficult to recruit astronauts for ISS missions.

On his last mission, STS-88, Cabana’s crew carried the Unity module to orbit and began the assembly of the ISS. “When we finally got on orbit, I don’t think anyone was more surprised than me that everything worked,” said Cabana. “To be able to be the first ones on board, to be able to turn on the lights for the first time, that was really special. It was great flying with that crew.”
Cabana said that it was not very challenging to integrate the various components of the ISS, given that many of them were built in other countries. “It’s about setting out your requirements and then meeting them,” he said. “I think it’s the greatest engineering accomplishment we’ve ever done.”

Cabana said that what’s most important right now is for the US to remain a world leader in space. “If we give that up, we’ll become a second-rate nation. I really believe that.” He pointed out that NASA’s budget is the lowest that it’s ever been, but nothing has been taken off its plate. “There are three variables: cost, technical, and schedule. We’ll never compromise on technical, so that leaves costs and schedules. And when you cut the costs, the only thing you can slide is schedule.” He noted that KSC’s three missions currently are the Orion multipurpose vehicle, the ISS, and the James Webb telescope. He is hopeful that as these and other programs gear up, many of the people who were laid off following the cancellation of the Constellation program and the shuttle may be able to come back to work again.

Asked how NASA’s relationship with commercial space firms are, Cabana made a crucial observation. “Every spacecraft that we’ve ever flown was made by a private contractor, remember. The difference is in how you contract for it and fly it. We want to make sure that we define the requirements well and allow the contractors to meet their requirements.”

What are the ingredients for success? “It’s a matter of national will and policy,” said Cabana. “The president has to say, ‘This is what I want you to do,’ and Congress has to modify and support what the president supports. They key is, once we’re directed to do something, the team will do an excellent job to get there. I think we’re still the first in space. The world is looking to us.”
The final speaker on the morning panel was Captain Ken Ham, USN, the chair of the Aerospace Engineering Department at the Naval Academy. Asked to characterize the significance of his flights, Ham responded, “Looking down this table, they’re insignificant.”
“After graduation from the Academy, around when the movie Top Gun came out, everyone and their brother and sister wanted to go into flight test,” recalls Ham. “So it was really hard to get in. What I learned when I went down there was that there was an incredible amount of talent. Another thing I learned was just how much fun these guys are.”

Summarizing the impact of the 21 shuttle flights that either built or serviced the ISS and the Hubble Space Telescope, Ham said, “During that time, we played on all the experience gained before us with regard to space walking, rendezvous, and so on. We accomplished some incredible things as a nation and as an international effort. We assembled it in six years, and it’s amazing.”
Ham said that his students are all very curious about the future of mankind. “Our vision is muddled right now, but I do believe that we’re going to come through this period and come out to a substantiated future. That question is very near and dear to the hearts of everyone here today. One of the privileges of being an astronaut is to share that feeling with people everywhere.” He said that he believes Americans crave a real exploration mission. “I think the failure of Apollo was that it never had a long-range plan. The mission was to tag the moon, and then it ended. We can’t afford to do that again. We can go tag Mars, but if we don’t plan beyond that, then it will just stop again.”

“When I look up into the the sky at the moon, it’s epic. When I look at Mars, it’s epic. It seems to me to be completely obvious that we need to go there, and I think if we decide to do it, the American people will support it.”