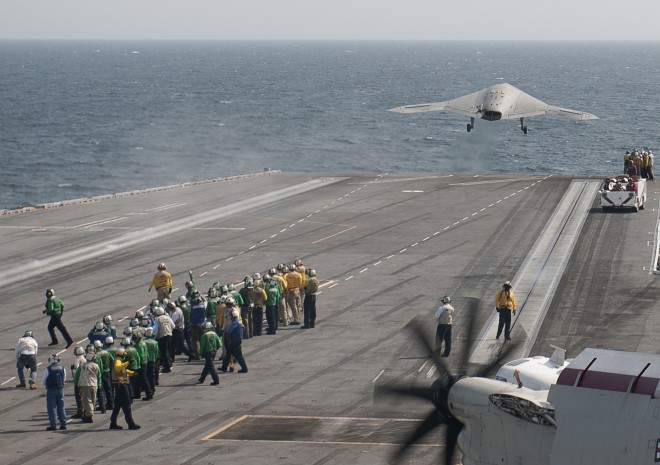 The Navy is making plans that could extend the testing of Northrop Grumman’s X-47B into 2015 with possible new carrier tests as early as next month, USNI News has learned.

The eventual contract will, “continue X-47B aircraft system, test bed, and flight test support at both shore-based locations and associated carrier detachments,” according to the solicitation.”

Sources familiar with the program said — with a contract extension — the testing could extend into Fiscal Year 2015 and could include an aerial refueling test of a X-47B. The refueling test had previously been planned for a surrogate aircraft. The additional funding could bring tests to Navy facilities and ships on the West Coast.

Naval Air Systems Command (NAVAIR) would not comment on the scope of the tests or how long the Navy would continue to test the X-47Bs, a spokeswoman told USNI News on Tuesday.

The UCAS-D program — consisting of not only the UAVs but also the guidance systems and control methodology — was scheduled to conclude shortly following aerial refueling tests with a surrogate.

Both X-47Bs were slated to be museum pieces before NAVAIR head Rear Adm. Mat Winter announced in August flight testing would continue.

“I believe you will see continued operation of the X-47B — at least into the fiscal year 2014 time period,” Winter told Washington, D.C. television station WJLA in August.
“As we go forward we are continuing to assess its operational opportunities.”

The new series of UCAS-D tests will run in parallel with the Navy’s acquisition of the Unmanned Carrier Launched Surveillance and Strike (UCLASS) program.

UCLASS is the Navy’s bid for the first production fixed-wing UAVs onboard aircraft carriers.

Northrop Grumman has until Oct. 10 to respond to the solicitation.