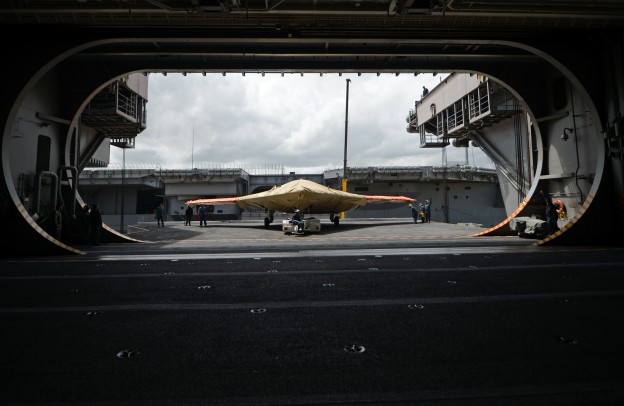 The letter from the House Armed Services Subcommittee on Seapower and Projection Forces—obtained by USNI News—was signed by chairman Rep. Randy Forbes (R-Va.) and ranking member Rep. Mike McIntyre (D-N.C.). It asks the Navy to develop the planned Unmanned Carrier-Launched Surveillance and Strike (UCLASS) UAV that would fully integrate with the carrier air wing.

“We request that you remain vigilant and monitor the path of this program closely because we believe the current path could limit the capability growth of the system in the future,” the letter says. It goes on: “We encourage you to draft a technology development request for proposal (RfP) that does not just focus on just one particular key performance parameter, but enables competition and capability tradeoffs in a spectrum of attributes such as range, payload, survivability and affordability.”

A spokeswoman for Mabus confirmed his office had received the letter but would not comment on any response.
“We don’t comment on personal correspondence to the Secretary,” Cmdr. Tamara Lawrence told USNI News on Thursday. “[Mabus] is appreciative of their interest in UCLASS and the future of our Fleet, and he looks forward to responding to them.”

Forbes and McIntyre’s letter follows August revelations that Pentagon leadership drastically changed the Navy’s original direction of UCLASS, from that of a stealthy and autonomous aircraft designed to penetrate into heavily defended enemy airspace, into a UAV that would replace existing land-based UAVs currently hunting terrorists.

The Navy’s current plan calls for a UAV that would operate on its own, circling the carrier while the rest of the air wing is off-duty and as a sea-based information surveillance and reconnaissance (ISR) platform to hunt terrorists, USNI News reported in August.

The original concept for UCLASS—originally Joint Unmanned Combat Air System (J-UCAS)—called for a much different aircraft.

“UCAS was going to have ISR and a weapons-delivery capability but was also an airplane that could stay up for long periods of time that could do penetrating ISR, that could do strike,” retired Adm. Gary Roughead, former Chief of Naval Operations and current board member at Northrop Grumman, told USNI News in August.

Beginning in 2011, the original $2.3 billion program changed under the direction of the Pentagon’s Joint Requirements Oversight Council (JROC) and eventually moved the program into a lower-cost concept that would de-emphasize the strike role.

The unit cost for the aircrafts, less research and development, and operations and maintenance cost (known as recurring flyaway cost), “required to conduct a 600 nautical mile persistent orbit shall not exceed $150 million”—with an additional requirement to strike at a distance of 2,000 nautical miles—according to requirement documents USNI News obtained.

Bob Work — former under secretary of the Navy and current CEO of the Center for a New American Security—told USNI News in August that the upcoming series of UCLASS RFPs would be instrumental in determining the future of the program.

“The RfP in my view has to at least be able to grow the capability. If all this is going to be is about cost. You will inevitably going to be driven toward a lower end system—which I don’t think the joint force needs,” Work said.

Four companies have expressed interest in building UCLASS and plan to compete for the contest: Lockheed Martin, Boeing, General Atomics, and Northrop Grumman.

A UCLASS draft RfP for the program was planned to be released this month with a follow-on expected in 2014.