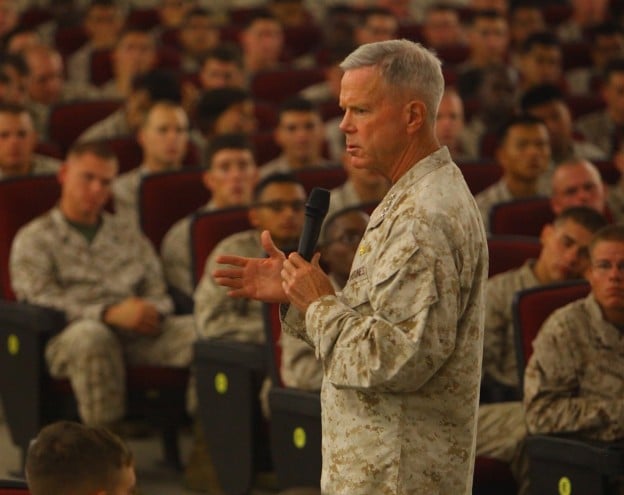 U.S. Marine Corps Commandant James Amos made a call Monday to shrink the Marine Corps from a decade high of 202,100 Marines to a force of 174,000 in an editorial published on Monday.

Amos — writing in The Atlantic’s Defense One online news service — said the new number was the bare minimum the Corps would need to conduct its operations.

“We have determined that with sequestered budgets a force design of 174,000 is right sized to allow the Marine Corps to remain America’s crisis response force, Amos wrote.
“Analysis shows that further reductions will incur heightened and, in some scenarios, prohibitive risk to our National Security Strategy, and unacceptable risk to the internal health of our Corps and its families.”

Before the mandatory sequestration budget cuts, the USMC planned to reduce its numbers to 182,100 by 2016, according to a report in Marine Corps Times.

The new number is based on a working group the Corps established in February as part of a Pentagon-wide effort to craft the Department of Defense’s Quadrennial Defense Review (QDR) — the four-year strategic planning document for the U.S. military.

“This effort was informed by the realization that, if faced with a continued sequester, the Marine Corps would have to live with severe budget shortfalls that might well threaten its ability to maintain its edge as the nation’s hedge force,” Amos wrote.
“The bottom line is we are asking more from our Marines today than at almost any other point in our history…a trend that will likely continue and further bound our future.”

The new numbers come as Marines wind down their role in Afghanistan and return to the Corps’ primary mission of an sea-based quick response force.

Amos did not give a timeline for the reduction. Since the announcement of the original planned reductions in 2011, the Corps has been reducing personnel by about 5,000 Marines a year.