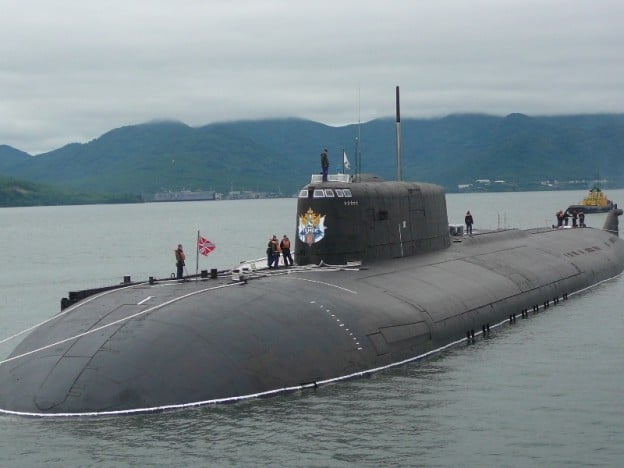 An Oscar II-class Russian nuclear guided missile submarine (SSGN) caught fire and burned for more than five hours on Monday at the Zvezda shipyard before being extinguished, according to Russian state press service Iltar-Tass.

“A fire broke out… during repair work on the Tomsk nuclear-powered submarine. When the fire source was located, the personnel were evacuated from the dock; nobody was injured,” according to a release from the Russian Ministry of Defense (MoD).
The fire on Tomsk (K-150) — at Zvezda for a complex refit since 2009 — was caused by a, “violation of safety rules during welding operations,” according preliminary data from the MoD.

Another release from the United Shipbuilding Corporation (USC) said the fire had been extinguished at 9:30 a.m. local time and that fire brigades were continuing to direct water at the ship’s interior spaces.

The ship’s weapons were not onboard and the nuclear reactor that powers the boat was shutdown, according to the MoD.

The Russian Navy has 7 19,400-ton Oscar II SSGNs that field a total of 24 P-700 Granit guided missiles, according to Naval Institute’s Guide to Combat Fleets of the World.

This is the Russian Navy’s second fire onboard a nuclear submarine undergoing maintenance in as many years.

In 2011, a fire broke out on the Delta IV nuclear ballistic missile submarine (SSBN) Yekaterinburg (K-84) while undergoing a refit in separate yard.

At the time, Russian officials said there were no nuclear missiles onboard the boomer, “but a respected magazine later cited several unnamed sources as saying this was untrue,” according to a Monday report from Reuters.

A special MoD commission is investigating the fire.