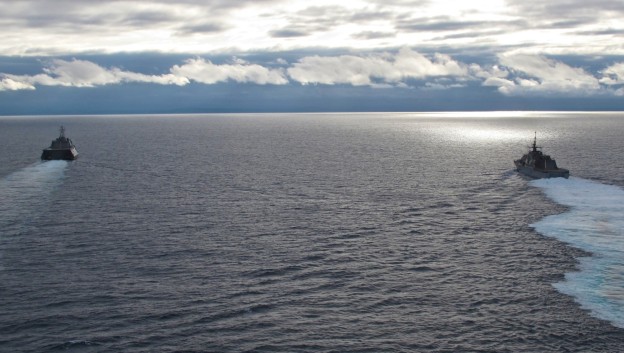 USS Freedom (LCS 1), right, and USS Independence (LCS 2), maneuver together during an exercise off the coast of Southern California in 2012. US Navy Photo

U.S. Navy Fleet Forces is recommending 14 Littoral Combat Ships (LCS) be based at Naval Station Mayport, Fla., according to an environmental assessment obtained by USNI News.

“Although no final decision has yet been made, the Navy’s preferred alternative is to homeport the initial East Coast Littoral Combat Ships at Naval Station Mayport,” according to a Fleet Forces statement provided to USNI News on Monday.

The service had considered basing the 14 LCS at Mayport or Naval Station Norfolk, Va. along with 21 LCS crews and support personnel for a total of about 1,700 sailors and civilian personnel at either location.

The Navy is looking to maintain a single base for LCS on the East Coast, “to maintain crew interchangeability and standardization of all shipboard procedures,” read the report.

Proximity to aerial components of the mission packages — MH-60 Seahawk helicopters and MQ-8 Fire Scout unmanned aerial vehicles — were also an important consideration, according to the assessment.

Ultimately the Navy plans to base the 14 ships on the East Coast by 2020. The first ships are currently based at Naval Station San Diego, Calif.

The Navy plans to operate the ships on a rotational basis between U.S. bases and sets of forward deployed ships in bases in Asia in Europe.

USS Freedom (LCS-1) has reached the midpoint of an eight-month deployment to Singapore ahead of plans to base four of the ships at the city’s Changi Naval Base.

However, it could be too early to tell what the final basing arrangements for LCS will be. Last week, reports indicated the Pentagon is favoring a plan to reduce the total numbers of both ship classes from 52 to 24 and stop the Navy from negotiating a planned fiscal year 2016 block buy of 24 additional ships.

In 2010, the Navy announced an $8.9 billion buy of 20 of the ships as follow-on to two of each variant purchased by the Navy to test the designs.

“In the tightening financial climate and with the risk of steeper budgetary cuts due to sequestration, the LCS program is falling under greater scrutiny as Department of Defense officials assemble the Pentagon’s FY15 budget, which will be submitted to Congress in early 2014,” according to a Monday report from Jane’s Defense Weekly.

The Navy had also planned to relocate a Nimitz-class carrier to Mayport, but the move has been stalled due to political resistance from some members in Congress.