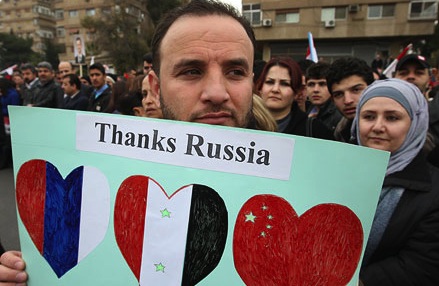 Even after shocking details emerged about Bashar al-Assad’s likely use of chemical weapons against his opponents in Syria, public opinion in the United States is decidedly unenthusiastic about a potential intervention. In opinion polls, large majorities say they want nothing to do with the worsening situation in Syria and express no desire to help the anti-Assad opposition. There is, however, a significant popular-elite split: While the populace as a whole is firmly against an intervention, foreign-policy elites are overwhelmingly in favor.

Is there a similar split in Russian society? Are the increasingly vocal urban middle classes in Moscow and Petersburg aghast at their government’s continued support of Assad’s beleaguered regime? Is the Kremlin’s realpolitik under any threat from the opposition? In short, should we expect any change in Russia’s Syria policy if, as seems likely, President Vladimir Putin’s popularity continues to tick downward and the opposition becomes emboldened?

Well, even in Moscow, the country’s liberal bastion, just 16 percent of the respondents in a recent Levada Center poll indicated that they sympathized with the anti-Assad rebels, as compared with 21 percent who sympathized with Assad. That is to say, even in the most Westernized, liberal part of Russia, and even after allegations of chemical weapons being used on peaceful civilians, more Russians sympathize with the Syrian government than with the forces fighting against it. The picture in Russia as a whole is even more lopsided: 7 percent support for the rebels; 19 percent support for Assad. Interestingly Russian opinion has moved in an even more pro-Assad direction since the last time a survey was conducted (November 2012) when 9 percent sympathized with the rebels and just 11 percent sympathized with Assad.

Russian society—and not just the parts that are close to the government—views the conflict in Syria in fundamentally different terms. In particular, Russian opinion appears to be much more convinced of the rebels’ Islamist orientation than is the case in America, where high-profile analysts often talk about the “moderate” and “secular” rebels fighting the Syrian government. Here, for example, is what Leonid Bershidsky, a noted anti-Putin writer and a frequent contributor to Bloomberg View, had to say in a column for Snob (a sort of Russian equivalent of The New Yorker): The Syrian opposition is also made up of Islamic radicals like the Muslim Brotherhood. The results of their activities should they come to power would be familiar to anyone who was in Cairo over the past year or two.

Ever since Hezbollah decided to help Assad he’s been beating the opposition. Common sense says that while winning the war he wouldn’t start to poison his enemies with gas and provoke the West into intervening. But to speak of common sense in relation to the Syrian conflict is absurd. Already around 100,000 people have died, and there aren’t any who are right, only those who are guilty.

It’s equally absurd to say that the opposition couldn’t have used chemical weapons. They say that the opposition doesn’t have gas or rockets. But in war you can seize weapons from your opponent. And Bashar Assad isn’t going to say to the West that his enemies have succeeded in acquiring chemicals that are banned by international conventions.

Bershidky’s column is highlighted neither because his analysis is the final word nor because he necessarily speaks for all Russians. His article is fascinating, though, because despite his liberal, pro-Western leanings and his evident disdain for Putin, his logic and understanding of the Syrian conflict are very similar to that often associated with the Kremlin. Bershidky, like the overwhelming majority of Russians, simply isn’t willing to accord the anti-Assad rebels any benefit of the doubt. He thinks they are all Islamist fanatics and finds it entirely plausible that they would have stolen chemical weapons and used them in an attempt to provoke a Western intervention. Those are opinions that are not—to put it mildly—very popular in Washington.

The deeper takeaway is that despite official Washington’s disgust and contempt for the Kremlin’s handling of the crisis in Syria, Russians (even anti-Putin, liberal Russians) aren’t particular upset by it. There is, quite simply, no noteworthy constituency in Russia for an anti-Assad intervention and the Kremlin has paid almost no political price for its continued support of Damascus. That doesn’t justify Russia’s actions, but it helps to explain why the Kremlin has remained so stubborn and steadfast in what, from Washington, appears to be a self-evidently ludicrous and untenable position.