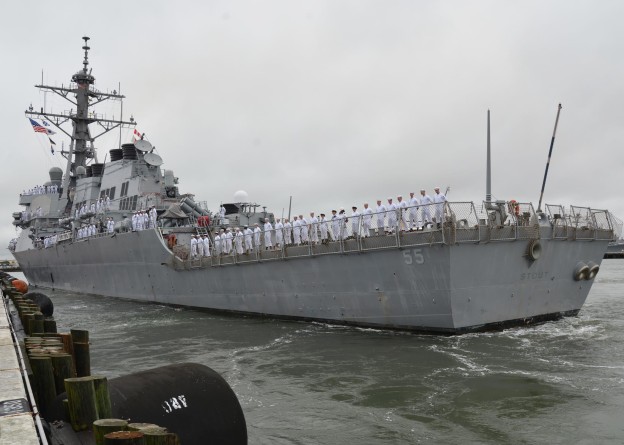 The U.S. Navy is moving a fifth Arleigh Burke-class guided missile destroyer closer to Syria, according to information from the U.S. Navy to USNI News.

USS Stout (DDG-55) departed from Naval Station Norfolk, Va. on Aug. 18 on a regular deployment and will join four other destroyers in the region.

USS Mahan (DDG-72) was slated to leave the region and be replaced by USS Ramage (DDG-61) for a ballistic missile defense (BMD) patrol in the U.S. 6th Fleet area of responsibility. Now both ships, along with USS Barry (DDG-52) and USS Gravely (DDG-107) will remain in the region.

All five destroyers are capable of intercepting ballistic missiles as well as launching land attack missiles.

It is also unknown is any of the service’s guided missile submarines (SSGN) are in the region. The SSGNs are capable of fielding 154 TLAMs.

The U.S. preliminary assessment of an Aug. 21 chemical weapons attack holds the regime of Bashar al-Assad responsible for the deaths of 1,429 people.

“The United States says it has ‘intelligence that leads us to assess that Syrian chemical weapons personnel … were preparing chemical weapons munitions prior to’ what Washington believes was a chemical weapons attack in the Damascus suburbs on August 21,” according to a Friday repot from CNN.

“ ‘In the three days prior to the attack, we collected streams of human, signals and geospatial intelligence that reveal regime activities that we assess were associated with preparations for a chemical weapons attack,’ the U.S. government said in its assessment released Friday.”