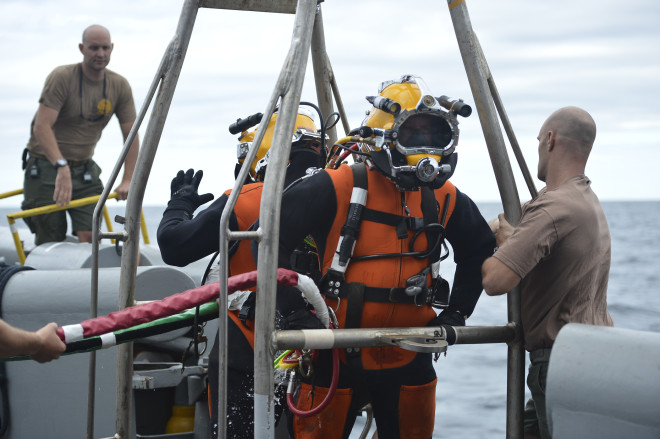 Divers, assigned to Mobile Diving Salvage Unit 2, Company 2-4, wait on the diving stage to be lowered into the water during air surface supplied diving operations off the coast of Virginia on Aug. 16, 2013. US Navy Photo

Navy salvage divers have recovered the flight data recorder and pieces of an Air Guard F-16C that crashed Aug. 1 after a mid-air collision, according to a Tuesday release from the service.

Divers from Mobile Diving and Salvage Unit (MDSU) 2 aboard the USNS Grasp (T-ARS-51) recovered the debris after almost a weeklong search from under 107 feet of water. Diving operations were completed on Monday, according to the statement.

“These key items will help us to understand what happened and what we can do to prevent a similar occurrence.” said Brig. Gen. Marc Sasseville, commander of the 113th in a statement

The F-16C from the 113th Wing D.C. Air National Guard had collided with another F-16 during a night training flight off the near Chincoteague, Va.

The second F-16 was able to land at Joint Base Andrews, Md. following the crash.

“The remnants of the aircraft and the flight data recorder are being transferred to Joint Base Andrews for examination by the Air Force’s Safety Investigation Board,” according to the statement.