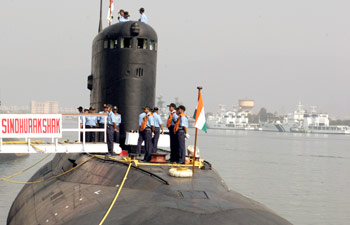 “Initial assessments indicate that an internal explosion occurred in the forward compartment of the submarine where ordnance was stored resulting in further near-simultaneous explosions and major fire aboard Sindhurakshak,” defense minister A.K. Antony told the Indian parliament on Monday.

In response to the explosion, the Indian Navy is now conducting checks on weapon safety systems aboard its submarines and auditing training for sailors, Antony said.

A Tuesday report in Jane’s Defense Weekly cited naval experts who concluded the explosion was caused by “mishandling of equipment.”

Sindhurakshak had rejoined the Indian fleet in April following a 36 month, $80 million refit in Russia and was armed with torpedoes and ship and land attack missiles. The ship was scheduled to depart last week on patrol, according to the Jane’s report.

The disaster highlights the weakness of the Indian submarine arm

“Ensuring a safe and effective submarine fleet will be the key to ensuring that their underwater capabilities will be on par with the increasingly powerful naval aviation and surface fleet capabilities,” Eric Wertheim, author of Naval Institute’s Guide to Combat Fleets of the World, told USNI News last week.

India’s neighbors and regional rivals Pakistan and China both have undergone extensive expansion in their submarine fleets.