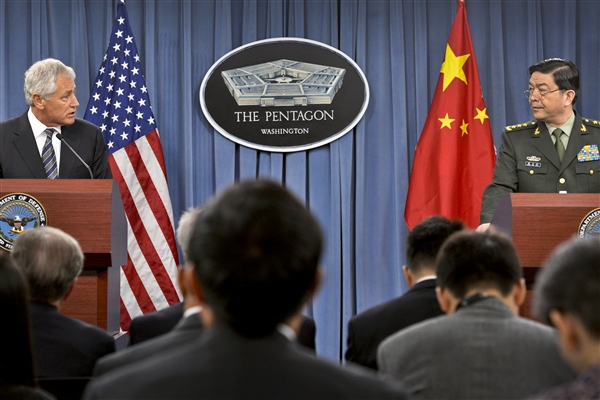 China’s military head maintained the right of the country to defend its maritime claims during a Monday press conference at the Pentagon.

Chinese Minister of National Defense Gen. Chang Wanquan told reporters through a translator China would not “barter away our core interests. And no one should underestimate our will and determination in defending our territory, sovereignty and maritime rights.”

Wanquan reiterated China’s territorial claims in the region are a “core interest.” Territorial interests with the core interest designation — including Tibet — are among the highest priority for the Chinese Central Committee.

Wanquan did not specifically mention ongoing conflicts in the South China Sea with Japan and the Philippines but did say China would not shirk from so-called provocative actions in the region.

“Any action that leads to trouble or provocation, any action — unwanted action out of the self-interest or further complicates or magnifies the situation would be highly irresponsible and will not lead to a favorable result,” Wanquan said.

The U.S. has claimed neutrality in the South China Sea but has advocated for multi-lateral talks between nations with overlapping claims in the region. China has said it prefers to deal one on one concerning territorial disputes.

The Monday briefing, held with U.S. Secretary of Defense Chuck Hagel, brings to a close a four-day U.S. visit by Wanquan.

During the briefing both Wanquan and Hagel called for increased U.S. and China military cooperation.

“Our goal is to build trust between our militaries through cooperation,” Hagel told reporters.
“Substantive military-to-military relationship is an important pillar for this strong bilateral relationship. The United States welcomes and supports the rise of a prosperous and responsible China that help solve regional and global problems.”

Next year, the People’s Liberation Army Navy will participate in the Rim of the Pacific 2014 naval exercises centered on Hawaii.

China and the U.S. have also established a cyber working group to discuss issues related to both countries in the cyber domain.