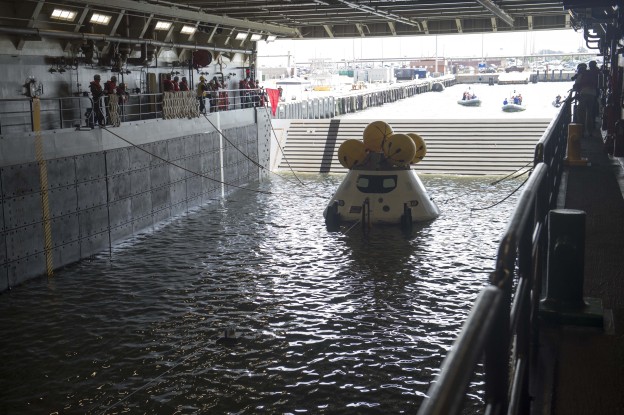 The Navy and NASA conducted tests this week in Norfolk, Va. to prove that a San Antonio-class (LPD-17) amphibious warship could be used to recover the space agency’s next bid for manned space flight, NASA officials told USNI News on Thursday.

NASA used a simulated version of the Orion capsule with the crew of USS Arlington (LPD-24) over tests on Wednesday and Thursday to learn if the ship’s crew could bring in the 19,000-pound crew module safely into the well deck of the ship.

“After thinking about the best way to handle [capsule recovery] between the navy and NASA we came up with the procedures we’ll be doing today,” Jim Hamblin, landing and recovery operations manager for NASA Ground Systems Development and Operations, told USNI News on Thursday.

In NASA’s last era of capsule flight, the Navy was responsible for plucking the craft and the astronauts from the Mercury to the Apollo program. During the moon race era, the Navy plucked capsules from the Pacific with divers and helicopters and deposited both on the decks of aircraft carriers.

The welldeck is “like a garage,” Scott Wilson, manager of production operations for the Orion Program, told USNI News on Thursday.

“You open the garage door and float into the ship.” 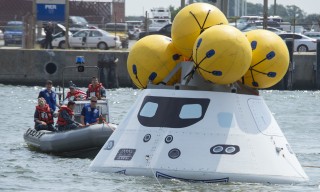 After the capsule splashes down, sailors from the LPD will pilot small boats to the craft and deploy divers to affix cables to the craft. Then the well-deck crew of the ship will use a winch to reel in the Orion capsule into the ship.

“Everything we’re doing with the navy the sailors onboard are trained to do it. They’re trained to be line handlers,” Andy Quiett, a former Navy Seahawk pilot with the U.S. Air Force 45th Operations Group, Detachment 3, told USNI News on Thursday.

The design of the recovery program is based on the existing skills of sailors on the LPDs augmented by a very brief course of training on handling the NASA equipment.

Only the Navy divers get special training in handling the capsule in NASA’s Neutral Buoyancy Laboratory in Houston, Texas.

The additional amenities on San Antonio-class were appealing to the NASA’s Wilson and Hamblin said.

The 25,000-ton ship has extensive medical facilities that NASA flight surgeons could use in the event of an emergency with the flight crew. The ship’s AN/SPS-48 air-search radar is also well suited to track the decent of the components of the Orion, Wilson said.

This week’s tests will inform a second test in the Pacific next January ahead of the first test shot of the Orion capsule in September 2014.

The 2014 launch and recovery will follow with a second unmanned shot in 2017 ahead of the first manned mission in 2021.