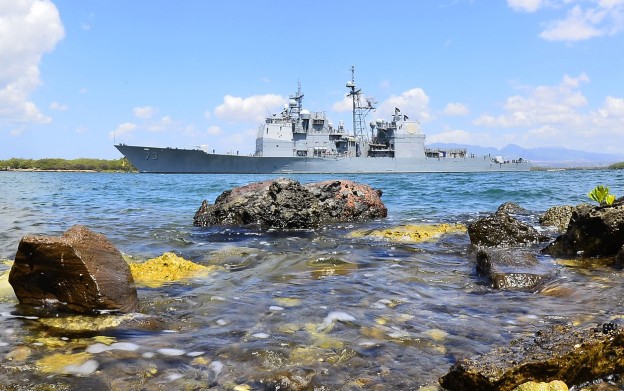 Damage to USS Port Royal (CG-73) — which ran aground in 2009 near Hawaii— is, ”not as extensive as previously believed,” according to a May Naval Sea Systems Command report to Congress obtained by USNI News.

On the ship’s first deployment from mid-2011 to early 2012 following the grounding, “emergent structural repairs were required in Bahrain due to the identification of new structural cracks,” according to the report.

At the time of the emergency repairs to Port Royal were widely thought to be related to the 2009 grounding.

However, “preliminary results indicate that the USS Port Royal ‘s material condition is comparable to other CG-47 Class ships that were included in the assessment,” after NAVSEA compared the ship’s condition to four other cruisers.

The revelation of the report adds a new wrinkle to the ongoing debate between members of Congress and the Navy over decommissioning seven Ticonderoga ships well ahead of the ships expected service lives.

As part of the Navy’s Fiscal Year 2013 budget, the service wanted to decommission the cruisers as well as two amphibious warships, Navy officials told USNI News on Thursday. Congress disagreed and included language in the 2013 authorization bill — passed in March — that prevented the Navy from decommissioning the ships as well as authorizing $628.5 million in funds to keep the ships in service. Those funds did not include Port Royal, which due to the supposed level of damage was an easy target for decommissioning.

Rep. Randy Forbes (R-Va.), the chairman of the House Armed Services Subcommittee on Seapower and Projection forces, told USNI News he is against the Navy plan to decommission the ships.

“In a difficult budgetary environment, it is imperative that we be able to maximize the service life of all our Navy vessels. Three quarters of the Fleet we will have in 2020 is in service today, making it even more critical that we fully utilize every appropriate vessel,” in a statement to USNI News.
“I hope to see the Port Royal continue active service alongside the other cruisers slated for modernization.”

The class suffers well known structural problems in the superstructure of the ship due to aluminum components originally designed to keep the weight of the ship down.

Commissioned in 1994, Port Royal is the youngest of the Ticonderoga-class.