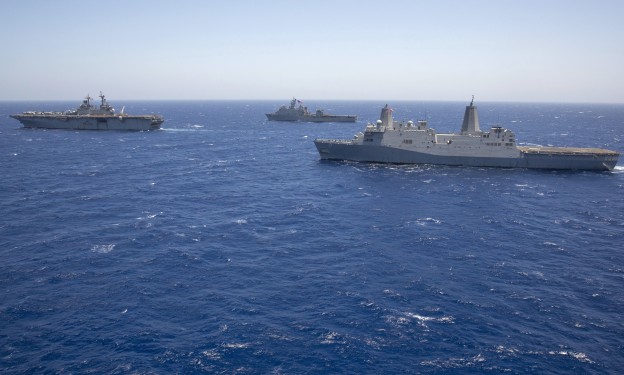 “There hasn’t been an official tasking,” Marine Capt. Eric Flanagan at the Pentagon told USNI News.
“They’re not getting ready to go into Egypt.”

“Egypt is (in) a crisis right now,” Marine Corps Commandant General James Amos told the Center for Strategic and International Studies think tank. “When that happens, what we owe the senior leadership of our nation are some options.”

Currently the amphibious helicopter carrier USS Kearsarge (LHD-3) and the USS San Antonio (LPD-17) are in the Red Sea following the June Eager Lion exercise between the U.S. and Jordan. The third ship in the ARG — USS Carter Hall (LSD-50 — is near the 5th Fleet headquarters in Bahrain.

“The point that he was making [is that] three Navy ships have the ability to move off the coast and be ready for action,” Flanagan said.A Navy official confirmed to USNI News that the ARG has not received new tasking to respond to the Egyptian crisis.

The ARG is embarked with about 2,200 Marines from the 26th Marine Expeditionary Unit (26 MEU) from Camp Lejeune, N.C. The ships departed in March for operations in the Middle East and the Mediterranean.

This post has been updated to replace the terms “orders” and “plans,” with tasking. As of late Friday, neither the Navy nor the Marine Corps have been not been given specific tasking in regards to Egypt.