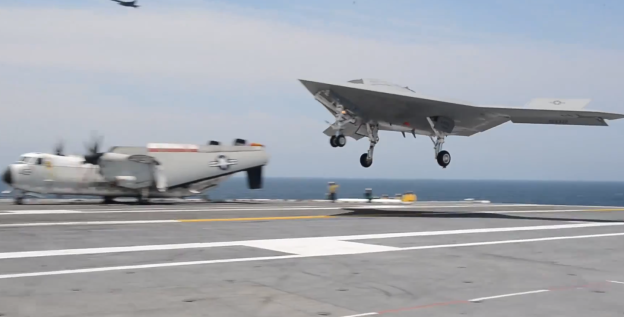 On its final approach to Bush a hypersensitive version of the same GPS technology used to direct families on vacation guided the hook of the tailless aircraft safely to the deck of the carrier and into history.

“The dynamics and complexity of the demonstration is not just flying an airplane. It is operating a system autonomously in and out of the most demanding launch and recovery environment around the world,” Rear Adm. Mat Winter program executive officer for unmanned aviation and strike weapons said in a Tuesday conference call with reporters.
“This is not trivial.”

The landing of the X-47B successfully proved the Unmanned Combat Air System Demonstration (UCAS-D) project and will pave the way to include unmanned aerial vehicles (UAVs) on carriers in the future.

The Navy’s focus now will be to move beyond the experimental UCAS-D and into a capability that will move from novelty to an organic component of the carrier air wing.

The next step will be development of the Unmanned Carrier Launched Airborne Surveillance and Strike (UCLASS) a capability the Navy wants to field by 2020.

The UCLASS program has run in parallel with the UCAS-D program. According to documents obtained by USNI News, the Navy is looking for a system (consisting of one or more aircraft) that can conduct two 650 nautical mile orbits around a carrier for $150 million.

In June, the Navy issued a preliminary request for proposal (RfP) to Lockheed Martin, Boeing, General Atomics and Northrop Grumman to begin design work on their bids ahead of a full RfP in 2014.

“All of the knowledge out of the program is being transferred to UCLASS,” Winter said.
“UCLASS will benefit from all of what we have done here in X-47B.”