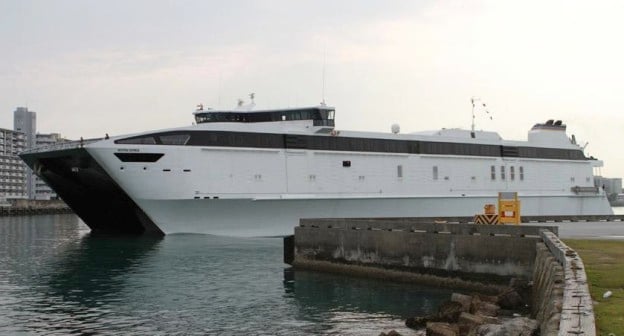 WestPac Express, in use by MSC since 2001 years, has been retained until February of 2014 by MSC, according to a release by the Australian vessel owner, Austal.

“The contract extension comes almost exactly 12 years after Austal announced it had signed a world first contract to charter the 101 meter high speed catamaran to the US military for the rapid deployment of Marines and their equipment in the Western Pacific,” wrote the company.

The option would be the third declared by MSC for WestPac since MSC signed a new charter for the vessel in 2011.

MSC is also acquiring ten Joint High Speed Vessels (JHSV) from Austal. The JHSV is an aluminum catamaran that will be operated by civilian mariners. Although not a direct replacement for WestPac, it will undertake several of the same missions.