The tests — conducted in May onboard the USS George H.W. Bush (CVN-77) — pair a Torpedo Warning System (TWS) towed behind the ship with a highly maneuverable Countermeasure Anti-Torpedo (CAT) that seeks and destroys the incoming enemy weapon. The CAT is currently being developed by the Pennsylvania State University Applied Research Laboratory.

The torpedo warning system is towed behind the ship. When the TWS detects an enemy weapon an operator on the ship decides whether or not to launch the CAT, NAVSEA told USNI News. 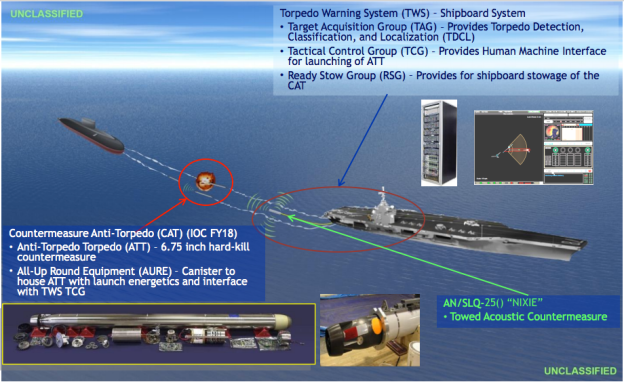 The Russian Type-53 torpedo includes sensors that detect the churn made by ships underway. Once the torpedo senses the chopped water it will follow a ship in a S-pattern between the wakes until it finds its targets.

“Anyone who buys Russian Kilo-class submarines — almost anyone the U.S. would come into conflict with — uses torpedoes which do not respond to U.S. torpedo countermeasures,” Friedman said.

Russia has heavily exported the Kilo diesel/electric submarine to Southeast Asia and the attack boat is a mainstay of navies in Vietnam, India and China.

The Chinese People’s Liberation Army Navy fields 12 Kilos with Soviet-era Type 53-65 wake homing torpedoes with a range of 11.8 miles, according to the soon to be released 16th edition of the Naval Institute Guide to Combat Fleets of the World.

The Type 53-65 torpedoes, in wide use around the world, were developed in the mid 1960s and were the first Russian mass produced torpedo to include the wake homing technology, according to Jane’s Weapons: Naval.

As conflicts in the South China Sea intensify and the Pentagon shifts more forces to the Pacific, submarines have been high on the wish lists for countries in the region.

In 2007, a PLAN Song-class submarine surfaced near now-decommissioned USS Kitty Hawk (CV-63), raising questions how effective the Navy was at defending its carrier fleet.

Chief of Naval Operations, Adm. Jonathan Greenert, has called for increased research and development into anti-torpedo torpedoes since he took the top Navy job in 2011.

NAVSEA has more testing for the SSTD system scheduled for this year and plans to have the CAT and TWS reach so-called initial operational capability by 2019 and Fleet wide adoption of the system by 2035.