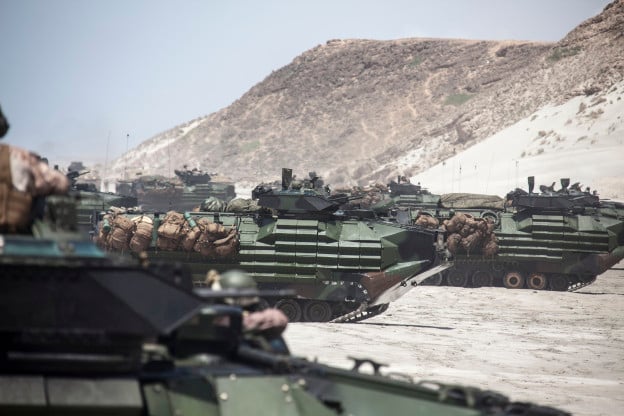 After ten years of fighting in Iraq and Afghanistan, the U.S. Marine Corps is retooling and repositioning itself back into its traditional role as a medium-weight maritime force that can operate with agility from the sea. Instead of training almost exclusively to fight insurgents deep inland, the Marines will focus on roles ranging from conventional warfighting, to conducting humanitarian missions, and to training the armed forces of partner nations. In essence, it will be a case of back to the future for the Marine Corps as it shifts back into its traditional role as the nation’s 911 quick-reaction force, former officials and analysts told USNI News.

But a significant question remains, which is how or even if the service will conduct forcible entry operations. The United States’ precarious financial situation means that the service may have to choose between keeping a robust fleet of amphibious capabilities or investing in capability that many view as holdover from a bygone era.

Robert Work, chief executive officer for the Center for a New American Security, who recently stepped down as undersecretary of the Navy, says he recently participated in an exercise sponsored by the Center for Strategic and Budgetary Assessments that addressed the topic.

Among four major Washington, D.C.–area think tanks participating, the consensus was that the Marine Corps would return to its traditional role as the war in Afghanistan comes to a close.

“Every single one of the participants essentially foresaw the United States Marine Corps going back to its traditional expeditionary force and readiness role,” Work told USNI News. “That was uniform across all four of the think tanks.”

Former Marine Corps deputy commandant for aviation Lt. Gen. George Trautman agreed that the service will return to its traditional role in the vast stretches of the Pacific. “The presence of strength breeds prosperity and peace,” he said.

The Marines have been in the Pacific theater continuously over the past 70 years to keep the peace, he said, and that presence will continue to grow as the United States rebalances its forces to the region. Anytime a crisis emerges, the Marines are usually the first to respond, be it a humanitarian disaster or some kind of unanticipated military crisis.

The service plans to keep a force of Marines deployed to Darwin, Australia, as part of the renewed interest the region, for example, Trautman says. Additionally, forces are being redistributed from Okinawa, Japan, to both Guam and Hawaii. Meanwhile, the doors are being reopened to training in Thailand and the Philippines, he added.

“Marines will be used all over the Pacific in small packets,” Work said. Those units will respond to any number of different types of contingencies.

Moreover, the Marine Corps has strong ties with partners in the region. One example is the island nation of Singapore. “The partnership between Marine Aviation and Singapore air force is as solid as can be,” Trautman said. Meanwhile, the service also has historic ties with the South Korea’s Marine Corps, which is closely modeled on its American counterpart.

Overall, the Marines are in good shape for the Pacific theater, having procured the Bell-Boeing MV-22 Osprey tilt-rotor and the Lockheed Martin F-35B Joint Strike Fighter, Trautman noted. The only real problem is that the U.S. Navy has not agreed to provide the service with as many amphibious assault ships as the Marines believe they need.

“Other than the fact that the United States Navy is unable to provide them the amphibious lift that’s essential to moving large amounts of equipment and men and materiel around a vast ocean,” Trautman said, the service is in good shape.

Work said that amphibious assault ships are vital for the Marines to be able to move around the world’s oceans—and he notes that all of the major think tanks participating in the exercise concurred on that point. But there are other ways to move troops—and the Navy does not the have the money to build all the ships it needs all the time. During this part of the Navy’s shipbuilding cycle, that service simply does not the have the funding to maintain the required 33-hull amphibious assault fleet and has had to settle for 28 vessels, Work says. The fleet was scheduled to rise to 33 in the 2020s, but it might not because of the congressionally mandated sequestration cuts.

Work said that to help move Marines, the Navy will deploy four or five of its Joint High Speed Vessels to the Pacific. Additionally, both of the Navy’s high-speed ferries will be deployed to the Pacific, he said, noting that the Navy is also developing the Mobile Landing Platform and the Afloat Forward Staging Base.

The Marines want to retain a forcible entry capability, Work said, but there is debate on whether the service should retain such a capacity. Analyst Dan Goure of the Lexington Institute is one such skeptic. “Where would you do another Iwo Jima?” Goure asked.

The concept of a true forcible entry, given the exiting threats around the world is nonsense, he said. Even if a relatively small Marine assault force made to shore, the rest of the task force is vulnerable to attack, Goure said. A real forcible entry operation is not one that puts just 200 Marine ashore, but one that sends 20,000 troops inland—with their logistical train in tow, he says.

Most heavily defended areas would require the combined efforts of U.S. military to using massive air and cruise missile strike to neutralize defenses. “If it’s really a defended beach nobody is sending any kind of armored assault vehicle,” Goure said. If a relatively small Navy/Marine force is sufficient, the threat is likely not going to warrant a true forcible entry capability anyways, he added. “It doesn’t even match their own scenarios.”

In his view, Work said, it is far more important to retain amphibious assault ships than the ACV. “I think it’s a matter of priorities. If I didn’t have a lot of money, I’d put the money in the amphibs. If I did have a lot of money I might buy the amphibs plus the ACV. Under any circumstances, however, the Marines need some type of protected vehicle to move its units around the battlefield. What will it look like?”

Because of sequestration automatically cutting Pentagon outlays by 10 percent every year for 10 years, the U.S. government does not have a lot of spare cash. While the Marines clearly would like to have the high speed of the ACV, Work said the service simply may not be able to afford it. “The Marine Corps with LCACs, MV-22s, and the amphibious capabilities they have right now is a very capable force able to conduct complex ship-to-shore maneuver,” he said.

And with all of the capabilities the Marines are scheduled to receive in the coming years, like the heavy-lift Sikorsky CH-53K helicopter, the Marines will remain “a pretty damn good” force ideally suited for the Pacific even without the ACV, Work noted. Given the competing priorities of paying for the MV-22 and F-35B, there is a dearth of financial resources available to the Marines, especially if the sequestration law is not overturned. Whether and how the ACV fits into the mix will depend on exploratory work now being conducted on whether the Marines can get a platform capable of high water-speeds for an affordable price. “Ultimately, it’s a trade off,” he said. “What do you want to keep?”

The Marines want to keep everything, but ultimately it is available funding that will determine what programs they will be able to pay for in this age of austerity.