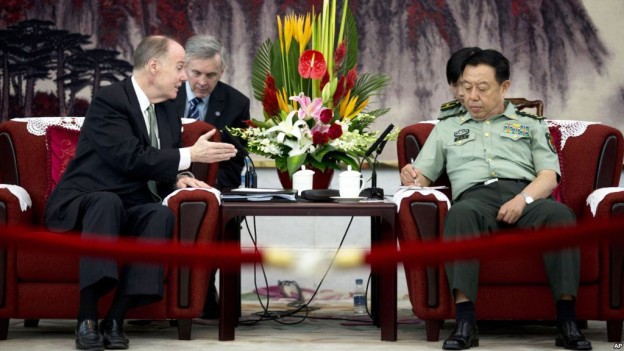 Donilon called for a more, “healthy, stable, and reliable military-to-military relationship” with China during a meeting in Beijing on Wednesday.

Haney and Donilon’s trip are ahead of next week’s between U.S. President Barack Obama and Chinese President Xi Jinping.

Obama has made a so-called rebalance to the Pacific a U.S. national security priority and the Pentagon has put plans in place to move more troops and ships to the region.

The emphasis on the Pacific comes against a backdrop of a rising China that has sought to exert greater influence in Asia — particularly the South China Sea region.

China is embroiled in political conflicts with neighboring nations over mineral and fishing rights that have led to stand offs with other countries that have claims in the region.

In the last several years, China has made strides in naval power. It has provided ships for piracy patrols off of the Gulf of Aden and begun learning to operate aircraft carriers.

China has had limited military to military contact with the U.S., with the U.S. Coast Guard being the one service that has had the most recent operational experience with Chinese maritime assets.