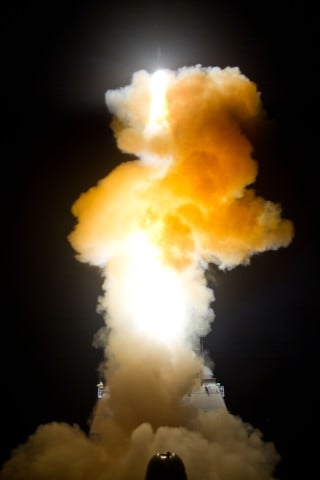 The target missile – fired from a test range in Hawaii at 5:25 p.m. local time on Wednesday – was detected by the SPY-1 radar aboard USS Lake Erie (CG-70). The ship launched a SM-3 Block IB equipped with a BMD kill vehicle that successfully destroyed the simulated threat missile in low Earth orbit.

Lake Erie’s Aegis BMD 4.0 is the latest set of software upgrades that allow the SPY-1 radar to track and send telemetry data of a target missile to the SM-3 Block IB interceptor.

“This test exercised the latest version of the second-generation Aegis BMD Weapon System and Standard Missile, providing capability for engagement of longer-range and more sophisticated ballistic missiles,” read a statement from the MDA.
Aegis BMD – managed jointly by the Navy and MDA – is rapidly becoming a one of the U.S. Navy’s highest profile mission. Aegis was originally designed as an anti-air system for fleet protection from air threats. Since its 1980s introduction into the U.S. Navy, the system has been modified with additional processing power, improved software and new missiles evolved the system to target and destroy enemy missiles.

Aegis BMD system – on 26 U.S. Navy ships as of November – is a keystone of the Obama administration’s European Phased Adaptive Approach (EPAA) that put Aegis equipped U.S. Navy destroyers and cruisers in the Mediterranean and plan for land-based BMD batteries in Eastern Europe.

The BMD mission is also the key focus of the Navy’s next series of Flight III Arleigh Burke-class destroyers.