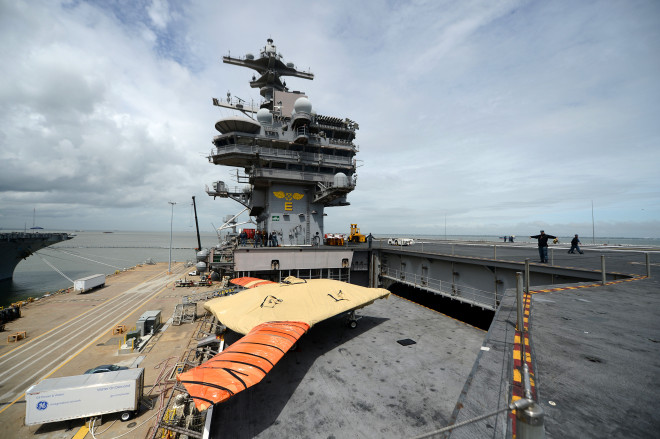 NAVAIR would not confirm an exact date for the launch.

The X-47B will do at least one launch using the ship’s steam powered catapult and preform so-called touch and goes onboard the deck of the Bush, according to NAVAIR. The X-47B was loaded onboard Bush Monday at Naval Station Norfolk, Va.

The plane however will not conduct an arrested landing onboard the aircraft carrier.

On May, 4, an X-47B made its first arrested landing at a terrestrial Navy test facility at Patuxent River, Md.

“Landing an unmanned aircraft on an aircraft carrier will be the greatest singular accomplishment for the UCAS demonstration and will serve as the culmination of over a decade of Navy unmanned carrier integration work”, said Capt. Jaime Engdahl, Navy UCAS program manager in a Monday statement from NAVAIR.

The Navy will continue to evaluate the data from the Patuxent River tests before it will determine a schedule to land the X-47B on an aircraft carrier, NAVAIR officials said.

The X-47Bs trip on Bush will not be the first time the aircraft will be underway aboard a carrier. In late 2012 the aircraft spent weeks aboard the USS Harry S. Truman (CVN-75) learning how to integrate the X-47B onboard a carrier and how it interacts with sailors and ship systems.

UCAS-D is the first step in a Navy plan to create an unmanned fixed-wing aircraft that would operate off an aircraft carrier.

Taking off and landing on a moving carrier is universally considered the most difficult task in aviation. Creating a system that allows an unmanned vehicle to preform the tasks only the most elite pilots have done paves the way for more advanced Navy systems.

By 2020 the Navy wants to field the Unmanned Carrier Launched Airborne Surveillance and Strike System (UCLASS). UCLASS plans to provide longer loiter times for surveillance missions and the ability to deliver weapons.