In addition to recommendations from Congress and the president, the secretary traditionally has been guided by a rather loose set of naming conventions—cruisers were to be named for battles, attack submarines for U.S. cities, destroyers for Navy and Marine heroes, and so forth. Controversy has erupted whenever the choice of a name strayed too far from those conventions, was seemingly swayed by politics, or deemed inappropriate for various reasons.

Ship-name controversies date to the early days of the Republic, but have become more prevalent in the latter part of the 20th century and the early years of the 21st. 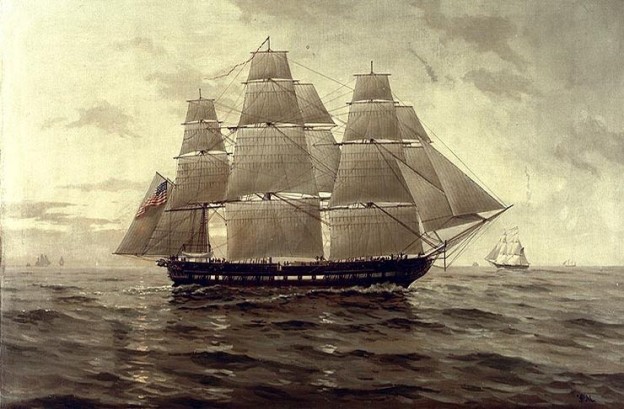 USS Chesapeake —George Washington asked that the names of the first six ships in the newly formed Navy be inspired by the U.S. Constitution. It did not take long for a naming convention to be broken for the first time. After the USS Constitution, United States, President, Congress, and Constellation, Navy Secretary Benjamin Stoddert arbitrarily decided to name the sixth ship the USS Chesapeake. 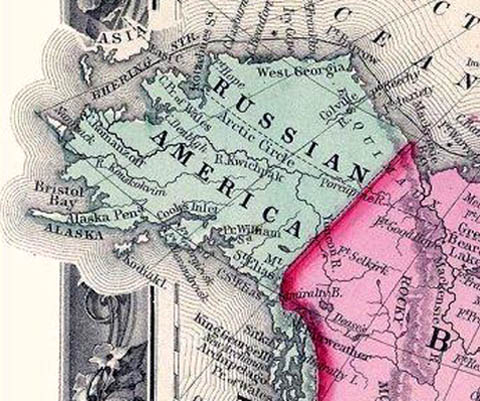 Ships named for Alaska—In a 1958 issue of the U.S. Naval Institute’s Proceedings magazine, Capt. William F. Calkins revealed that several ships that were to honor locations in Alaska had to have their names burnished off their hulls at great expense. When the names initially had been chosen, it had not occurred to anyone that many places in Alaska were named by early settlers from Russia. The U.S. Navy simply could not have Russian names on its ships during the Cold War.

USS Carl Vinson—In 1973, it was announced that Georgia congressman and longtime chairman of the Armed Forces Committee Carl Vinson would be honored with a namesake carrier. Even though Vinson had been one the U.S. Navy’s greatest champions, some critics did not think he merited becoming one of the few living people to be honored with a ship since Thomas Jefferson in 1814.

USS Corpus Christi—Los Angeles-class attack submarines are named after U.S. cities, but religious groups protested the selection of Corpus Christi because it meant that an instrument of war would bear the Latin phrase “body of Christ.” The Navy rectified the problem by modifying the sub’s name to City of Corpus Christi.

USS Henry M Jackson—When U.S. Senator Henry “Scoop” Jackson died unexpectedly in 1983, President Ronald Reagan quickly moved to have the latest ballistic-missile submarine named in his honor. The residents of Rhode Island were not pleased, for the sub already had been named for their state. To appease the Rhode Islanders, an attack submarine was named the Providence. 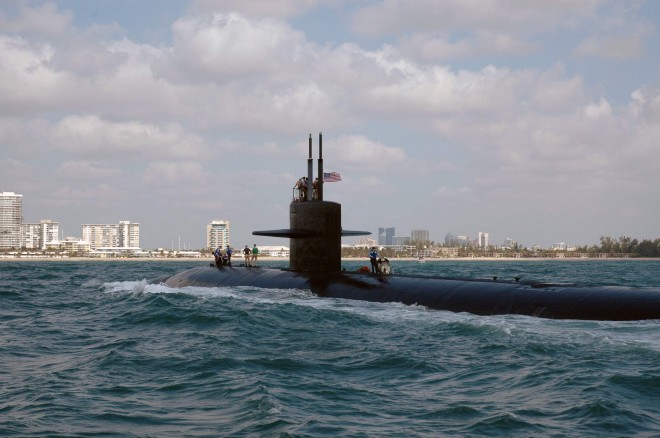 USS Pittsburgh—In 1984, Rep. William J. Coyne (D-PA) blasted the Reagan administration for naming an attack submarine for Pittsburgh, claiming that it was a shameless attempt to placate the residents of the area without having to address the city’s high rate of unemployment. 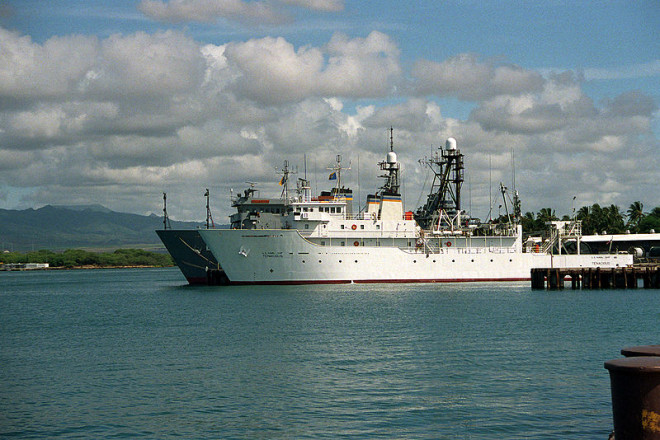 USS Intrepid—The carrier known as the “Fighting I” has a storied history that includes battling in the Pacific and recovering astronauts before becoming a popular museum in New York City. When the Navy announced in 1987 that a small (and some said ugly) ocean-surveillance ship would be the USNS Intrepid, veterans of the mighty carrier were insulted that the name of their beloved ship would be bestowed on a far less fearsome vessel. The name was changed to Tenacious. 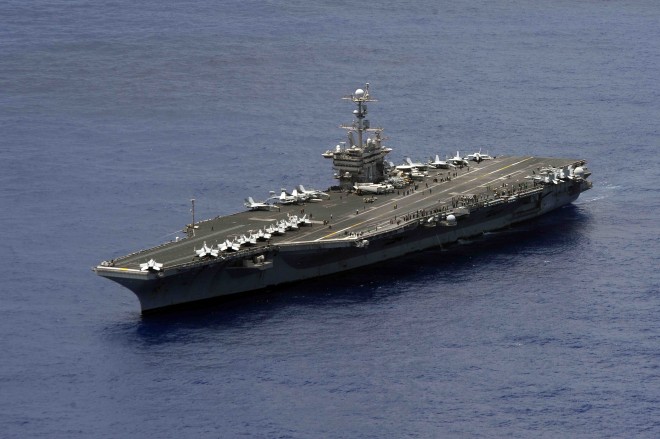 USS John C. Stennis—Like Vinson, Congressman John Stennis had been a tireless advocate of a strong modern Navy. And also like Vinson, Stennis had a poor record for advancing civil rights. Both were fervent segregationists, a point that many thought should have precluded them from being honored with a namesake carrier. 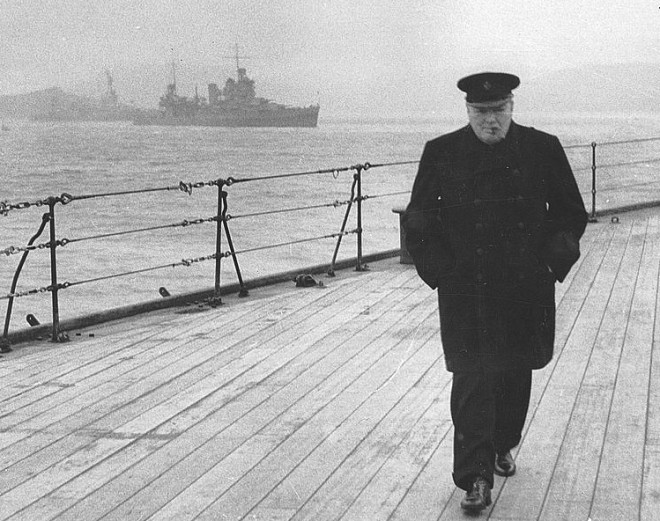 USS Winston S. Churchill—Churchill was not the first foreigner to have a U.S. Navy ship named in his honor, but it still upset a number of individuals who thought ships should only be named for Americans. They overlooked the fact that Winston Churchill’s mother was American and he had been made an honorary U.S. citizen in 1963. However, the timing of the choice led some to question whether the administration of President Bill Clinton was trying to curry favor with British Parliament when the president was involved with the Irish peace process. 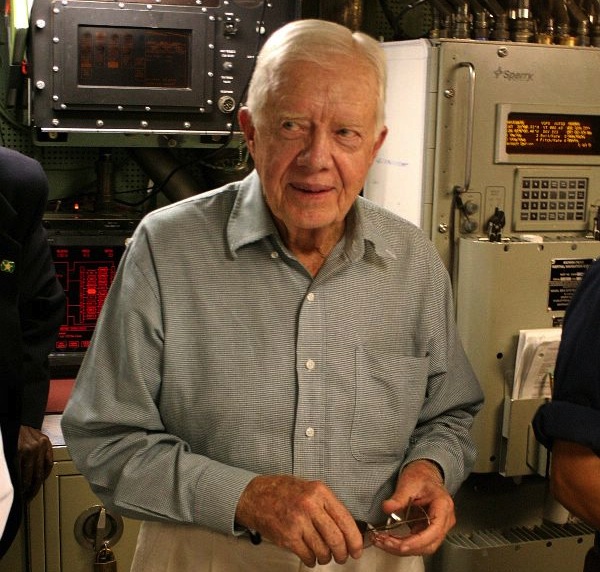 USS Jimmy Carter—By designating a Seawolf-class submarine USS Jimmy Carter, the Navy perhaps dodged the conundrum of having to name an aircraft carrier in honor of a former president who had not been a supporter of the carrier program. Fortunately for the Navy, the fact that Carter (the only president to have graduated from the U.S. Naval Academy) had served as a submariner, made the naming-decision an ostensibly appropriate honor. 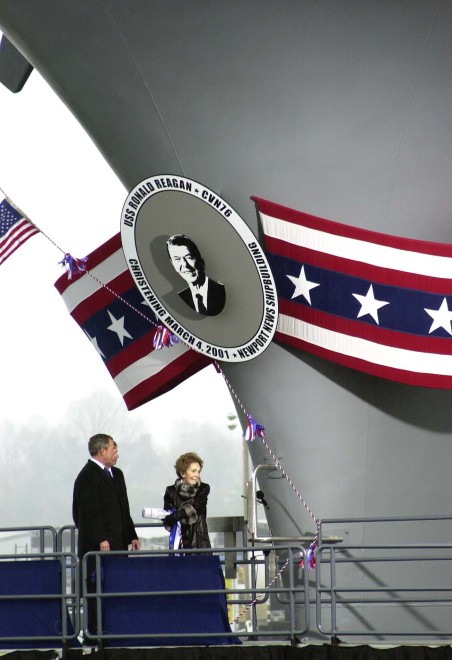 USS Ronald Reagan—It took a bit of horse-trading to get CVN-76 named for Reagan, who was still living at the time of the announcement. The Clinton administration agreed to appease Reagan’s supporters by naming a carrier for the Republican president, but only after another carrier was named for Democrat Harry S. Truman. 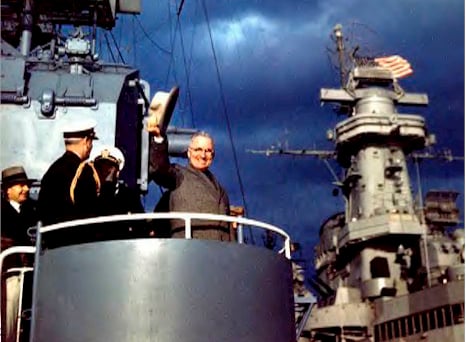 USS Harry S. Truman—While still under construction, the USS United States was renamed Harry S. Truman as part of the compromise to name a carrier for Reagan. Truman was a curious choice to be honored with a carrier since he had canceled the first supercarrier in 1949 just a few days after the keel was laid down. The name of that ship? The United States. Truman thus managed to cancel the name “United States” twice. 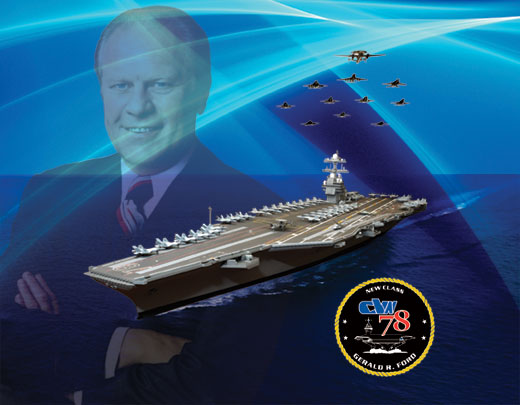 USS Gerald R. Ford—When the Navy announced the new class of carrier entering service in 2015 would be named for former president and WWII Navy officer Gerald Ford, it angered veterans of the decommissioned USS America. The vets argued that Ford was not much more than an adequate president, so it was more fitting for the carrier-class to be known as America since the name has been part of Navy tradition dating to the War of Independence. 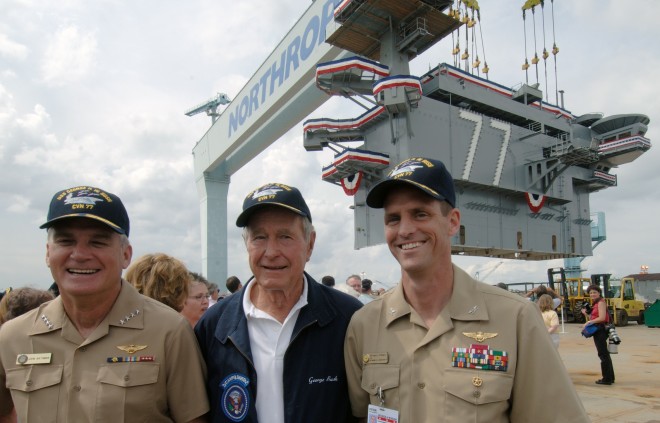 USS George H.W. Bush—Unsurprisingly, cynics took issue with a carrier being named for Bush at a time when his son was president, questioning the amount of influence the White House had on the decision. Others feared that the name would make the ship a constant target for nations and groups that resented the policies of the younger Bush. Defenders noted that in addition to being a former commander in chief, the elder Bush had served in WWII as a naval aviator. 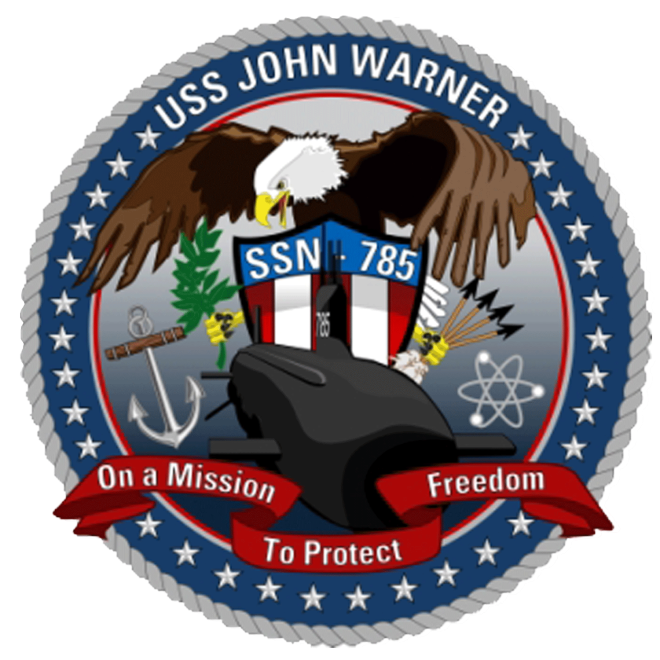 USS John Warner—The Navy had stuck with convention by naming the first 11 Virginia-class submarines after states before changing course and announcing that the 12th sub would honor U.S. Senator John Warner. Traditionalist griped that another type of vessel could have been named for Warner instead of breaking convention. 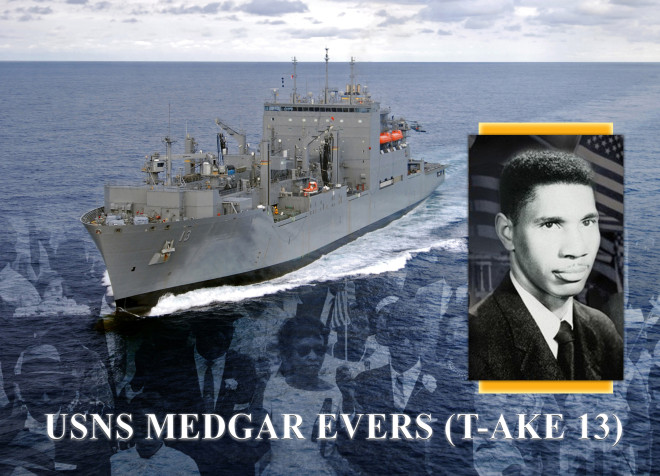 Navy announcement in 2009 of the naming of USNS Medgar Evers (T-AKE-13). US Navy Photo

USNS Medgar Evers—Critics accused the President Barack Obama’s administration of ignoring Navy tradition and blatantly politicizing ship names by honoring slain civil rights leader Medgar Evers with a dry cargo vessel. Although the critics said that political activists had never before been given namesake ships, there had been several, including a destroyer tender named for labor leader Samuel Gompers and a cargo ship named for Amelia Earhart to recognize her role as a pioneering aviator and advocate for women’s rights. 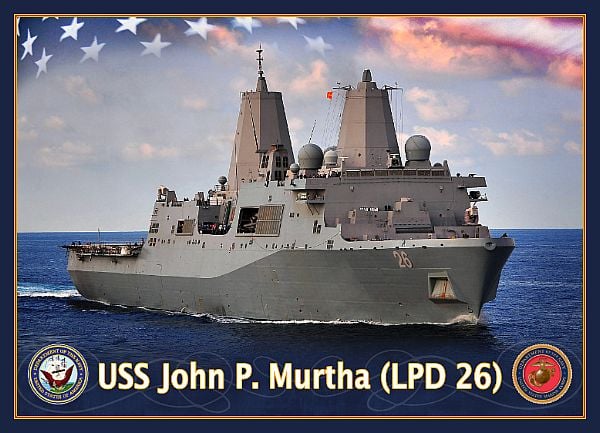 USS John P. Murtha—The 2010 decision to name an amphibious transport vessel for the late Pennsylvania congressmen and former Marine was met with immediate condemnation from critics who maintained that Murtha was unworthy since he had accused a group of Marines of murdering Iraqi civilians “in cold blood” without knowing the facts. 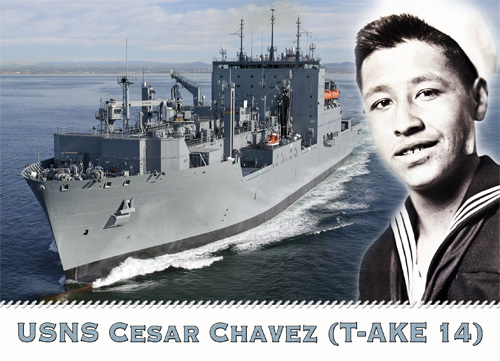 USNS Cesar Chavez—Cesar Chavez was a dedicated champion of civil rights who strove to improve labor conditions, but many observers thought the 2011 decision to name a Lewis and Clark-class cargo ship after him was misguided. In addition to describing his service in the Navy as “the two worst years of my life,” Chavez believed strongly in nonviolence and probably would not have wanted his name on a warship. 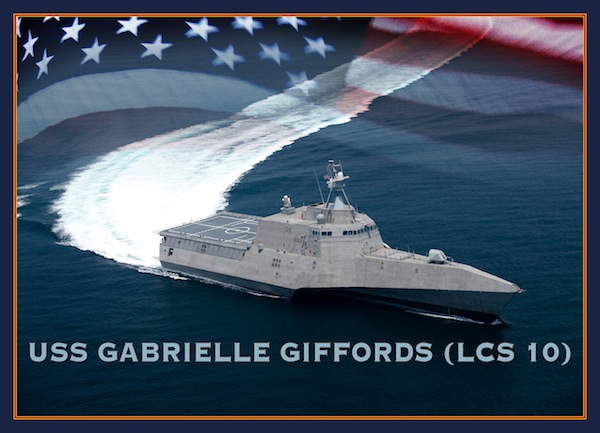 USS Gabrielle Giffords—While noting that Congresswoman Giffords recovery from injuries suffered during a 2011 shooting was admirable, critics believed she had done little in support of the Navy during her short tenure to merit the namesake Independence-class littoral combat ship announced in 2012. It was argued that it would have been more suitable to name the vessel for any of the thousands of Marines and sailors who died defending the country. 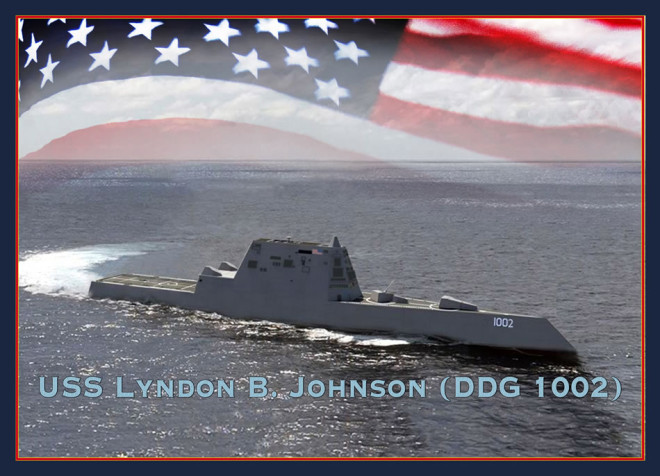 USS Lyndon B. Johnson—Following the 2012 announcement that a Zumwalt-class destroyer would be named the Lyndon B. Johnson, many Democrats felt slighted because LBJ was not being honored with a carrier, as several Republican presidents had been. Observers believed that LBJ may have been downgraded because the Navy had suffered a series of indignities during LBJ’s presidency, such as the capture of the USS Pueblo and the attack on the USS Liberty. 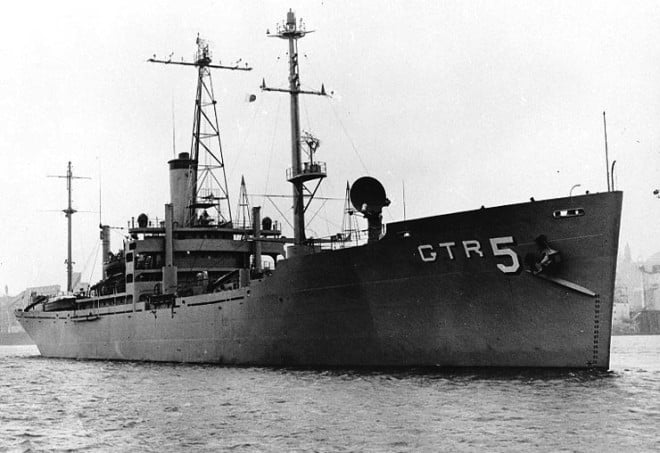 USS Liberty—The 1967 Israeli attack on the Liberty remains a hotly debated topic that involves conspiracy theories and accusations of cover-ups. In an unusual case of the name of the ship being more controversial than that of which it is intended to honor, a proposal to name a library in Wisconsin in memory of the Liberty met fierce resistance from the Jewish community which believed that the name was being sponsored by a group wishing to promote anti-Semitism. 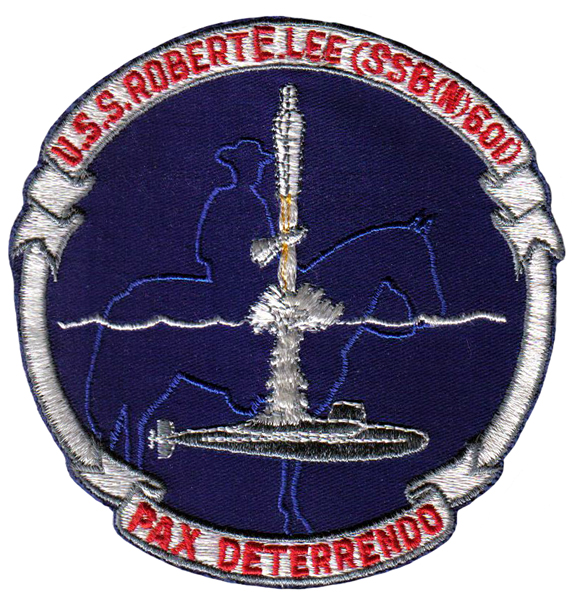 USS Robert E. Lee, USS Stonewall Jackson, USS Dixon, and USS Hunley—In the 1960s, the U.S. Navy seemed to have forgiven their Civil War adversaries and named several ships after Confederates (including George Dixon who sank a U.S. Navy ship while commanding the submarine H.L. Hunley). With the issue of honoring Confederates having grown more contentious in recent years, the Navy has avoided controversy by not reusing the names of such ships after they were decommissioned. 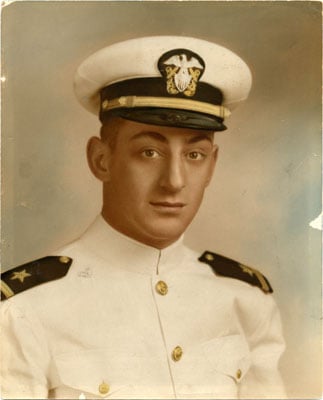 Portrait of then Ensign Harvey Milk

USS Harvey Milk ?—In 2012, there was grumbling from conservative commentators over Congressman Bob Filner’s petition to have a ship named after San Francisco activist Harvey Milk. Milk, who had served as an officer in the Navy, was assassinated soon after becoming one of the first openly gay men to be elected to public office in California. The Navy has not announced any plans to meet Filner’s request.

UPDATED: In 2016, then-Secretary of the Navy Ray Mabus named a planned fleet oiler for Milk.