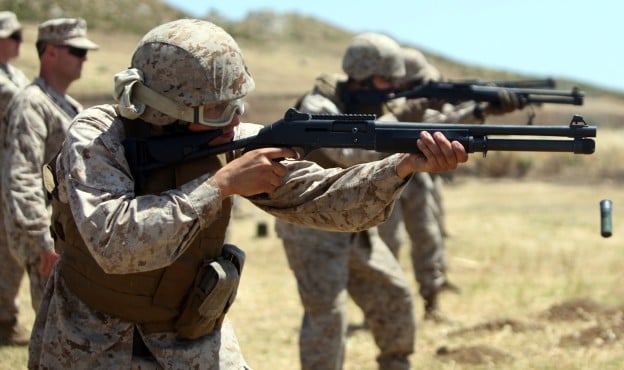 The new Marine Air Ground Task Force-Crisis Response (MAGTF-CR), will operate in the Mediterranean to give the United States quicker response times to trouble in Africa and the Middle East. Instead of a ship-deployed force, the unit will be based around a company of infantry Marines, six MV-22 Ospreys, and two KC-130J Hercules fixed-wing aircraft. This is a surprising move for a Marine Corps that wants to return to amphibious roots.

The light, highly mobile force is clearly designed to decrease response time in the region at the expense of combat power. This makes it ideal as a first response to terrorist threats or spontaneous protests that turn violent and could threaten U.S. embassies in the region. The rifle company could be a boon to U.S. State Department officials threatened by regional conflict, and could easily buy breathing space for a MEU/ARG to organize a more deliberate Non-Combatant Evacuation Operation (NEO). There are a few things that jump out about the new unit.

First, the MAGTF-CR adds a company-level construct to the traditional MEU, MEB, MEF levels, which are based around an infantry battalion, regiment, and division respectively. Although there are no plans to expand this format beyond the single MAGTF-CR recently announced, it is recognition that the Marine rifle company has become a far more capable asset in recent years, thanks to concepts such as Enhanced Company Operations (ECO). ECO as a concept calls for Marine rifle companies to operate independently and as dispersed units as small as a fire team of four Marines. A more dispersed company will have to rely on responsive fire support and timely intelligence to survive. The plan to form the MAGTF-CR around just a company seems tailor-made for the ECO concept.

Despite the increased capability, the MAGTF-CR is not a replacement for Mediterranean-based MEU/ARG rotations. A standard rifle company will carry no organic fire support larger than a 60mm mortar and will have only a section of those. For sustained operations after the MAGTF-CR is committed, it will need significant support from a MEU or some other organization in order to remain in place.

Second, the MV-22 has come into its own as a combat aircraft. Despite its reputation, the aircraft has performed admirably in both Iraq and Afghanistan in both air assault and assault-support roles. Much in the way that ships are the heart of the MEU/ARG, the Ospreys will necessarily be the heart of the MAGTF-CR. The extended range of the MV-22 Osprey (~870 nautical miles) over other rotary-wing aircraft such as the CH-53 Sea Stallion (~540 nautical miles) offers the new unit more flexibility than it otherwise would have. (Ranges do not include the aerial refueling capability provided by the two KC-130Js.) Still, to reach most crisis spots the unit will have to depend on these refuelers, leapfrogging between regional airstrips, or “lily-padding” between amphibious ships at sea.

Third, the creation of this new unit shows that while the entire Department of Defense is preparing to transition to a post-OEF status, the Navy and the Marine Corps do not expect a very peaceful operating environment. Before Iraq and Afghanistan, the Navy and Marine Corps provided sustained forward presence in the form of ARGs across the globe. Those deployments will resume and continue with the addition of both the MAGTF-CR in its eventual home and new Marine rotations to Darwin, Australia. Expanded missions and contracting troops levels means Marines and sailors will continue deploying even after Operation Enduring Freedom passes from the schedule.

This is a good move for the Marine Corps. It will give the Commandant one more option when he’s asked where the closest Marines are, and give the State Department another layer of assurance for safety after the 2012 attack in Benghazi, Libya. After that attack and others throughout the region, U.S. leadership demanded an even swifter response than the MEU/ARG. The MAGTF-CR seems well poised to bridge the gap.