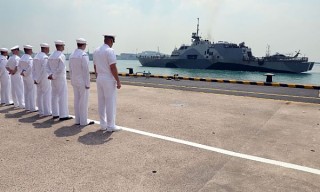 The first Littoral Combat Ship has arrived in Singapore kicking off an eight-month deployment to put the LCS concept through its most comprehensive test since the advent of the program, the U.S. Navy announced Thursday.

The deployment will focus on international cooperation exercises and to test how to man, equip and deploy the 3,000-ton ship far from U.S. shores.

“We plan on spending most of our time here in Southeast Asia – this will be Freedom’s neighborhood for the next eight months,” Cmdr. Timothy Wilke, Freedom’s gold crew commanding officer said in a statement.” We are eager to get out and about, work with other regional navies and share best practices during exercises, port visits and maritime security operations.”

This will be the second deployment for Freedom, following a brief 2009 deployment to the Caribbean and the Western Pacific in support of anti-trafficking missions in U.S. Southern Command.

Freedom deployed with a stripped down version of the surface warfare mission package that replaced a surface-to-surface missile battery with Navy visit board search and seizure (VBSS) teams.

As part of the test deployment, the Navy has also expanded the core crew of the ship from 40 to 50 to help share the load of the maintenance of the ship.

The ten sailors were added following a series of reviews by Navy leadership on the manning challenges of LCS.

“I would expect them to fill in a variety of roles from in port watchstanding to engineering plant technician and so forth as their individual’s rates and skill sets allow,” said Capt. Kenneth Coleman, LCS requirements officer in a January Interview with USNI News.
“I think we’ll find that the core crew will no longer be 40; it will be 50 sailors that will now become a cohesive team.”

Freedom’s deployment comes ahead of a plan to base four LCS in Singapore.