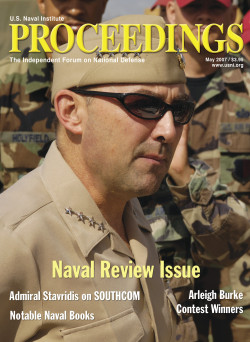 Admiral Stavridis anticipates departing his current duties this summer as combatant commander for all U.S. forces in Europe; as Commander, European Command; and as NATO’s Supreme Allied Commander, posts he has held since early summer 2009. In his role as Supreme Allied Commander, he has directed the NATO efforts in Afghanistan, commanded the NATO operations in Libya in 2011, led security in the Balkans, developed a successful counter- piracy campaign off the coast of East Africa, implemented an improved missile-defense posture for Europe and successfully expanded alliance partnerships throughout the world.

Speaking for all members of the Board of Directors, Acting Chair Vice Admiral Nancy Brown, U.S. Navy (Ret.) said, “We are delighted and honored by Admiral Stavridis’ acceptance. He is a distinguished officer and an individual of the very greatest accomplishments whose contributions epitomize the mission of the U.S. Naval Institute. This is an exciting time for the Naval Institute. It will be in the very best of hands with him at the helm of our Board.”

A surface warfare officer, he commanded the destroyer USS Barry (DDG-52) from 1993-1995. The Barry won the Battenberg Cup as the top ship in the Atlantic Fleet under his command. In 1998, he commanded Destroyer Squadron 21 deploying to the Arabian Gulf and winning the Navy League’s John Paul Jones Award for Inspirational Leadership.

From 2002 – 2004, he commanded the Enterprise Carrier Strike Group, conducting combat operations in the Arabian Gulf in support of Operation Iraqi Freedom and Operation Enduring Freedom. From 2006 – 2009, he commanded U.S Southern Command in Miami, focused on Latin America and the Caribbean.

Admiral Stavridis earned a PhD and MALD in international relations from The Fletcher School of Law and Diplomacy at Tufts University in 1984, winning the Guillon Prize as outstanding student. He is also a distinguished graduate of the National War College and the Naval War College. His decorations and awards include two awards of the Defense Distinguished Service Medal and the Defense Superior Service Medal, and five awards of the Legion of Merit. He holds sixteen international medals and decorations as well.

He is author of Destroyer Captain and co-editor of the Watch Officer’s Guide, Division Officer’s Guide, and Command at Sea, all published by the Naval Institute Press. He also wrote Partnership for the Americas, about Latin America, published by National Defense University Press. From the rank of ensign through admiral, he has published more than three dozen major essays and commentaries in the Naval Institute’s flagship journal Proceedings, in addition to another fifty articles in other security publications.

Upon learning of his selection by the board, Admiral Stavridis said, “I am passionate about the Naval Institute, which has been the intellectual heart of our Naval profession for well over a century – Navy, Marine Corps, Coast Guard, and Merchant Marine. I look forward to taking on this responsibility after retirement from the Navy.”