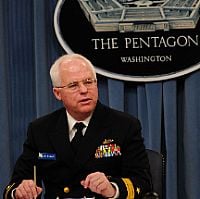 The $155.8 billion request is split between $45.4 billion for military personnel, $43.5 billion for procurement for ships, aircraft, weapons and Marine Corps spending, $16 billion for research and development and $2.3 billion for infrastructure.

Missing from the budget are Overseas Contingency Operations funds, that have not been requested yet from the Department of Defense.

The budget also sustains the two-a-year construction for the Virginia-class submarine program and the construction of nine Arleigh Burke-class guided missile destroyers over the next five years, multi-year deals that were part of a budget deal that was achieved with the passage a Fiscal Year 2013 appropriations bill as part of the latest Continuing Resolution, signed in March.

“I got all my multi-years, my new starts and my [military construction projects],” said the Department of the Navy’s budget chief, Rear Adm. Joseph P. Mulloy in a Wednesday Pentagon briefing.

The new defense bill alleviated operations and maintenance shortfalls, allowed the Navy to begin new construction and properly resourced the navy’s investment accounts, Mulloy said. However, the sequestration cuts still give the Marine Corps and the Navy a $10.7 billion shortfall, according to Department of the Navy budget documents.

Those cuts would strip $4.4 billion out of operations and maintenance accounts and $6.3 billion from investment accounts.

The Navy is adding about 4,000 sailors over the next five years with a Fiscal Year 2018 end strength of 326,100. Those additions are due to increase in maintenance personnel and training for platforms, such as the Littoral Combat Ship.

“To be able to operate the force we have and be able to man and train we need these forces,” Mulloy said.

Over the Future Years Defense Plan (FYDP), the Fiscal Year 2014 budget will fund $84.7 billion in the shipbuilding accounts with $14.3 billion slated for 2014.

The Navy will continue to build two new Virginia-class attack boats a year for a total of ten over the (FYDP) until Fiscal Year 2018. The Navy will also procure nine Arleigh Burke-class destroyers over the FYDP with one new start in Fiscal Year 2014. The Navy will buy a total of 14 Littoral Combat Ships, with four in 2014.
Funds will pay for the third Mobile Landing Platform, which will replace the USS Ponce as the service’s Afloat Forward Staging Base, and four service life extensions for the Navy’s Landing Craft Air-Cushion (LCAC) amphibious landing craft.

The Department of the Navy plans to acquire 165 airframes in Fiscal Year 2014 between the Navy and the Marine Corps.

The largest buy for the Navy in Fiscal 2014 will be 21 EA-18G Growler electronic attack aircraft, followed by 19 MH-60R and 18 MH-60S Seahawk helicopters and 16 P-8A Poseidon maritime surveillance aircraft.

The Growler has become a “national force,” Mulloy said.
“These airplanes flow in to support any service.”

The program has grown to 10 carrier-based squadrons and four ground squadrons. During the 2011 Operation Odyssey Dawn, the Navy deployed a ground-based Growler squadron based in Iraq to assist in eliminating Libyan air defenses.

The Marines will buy 25 in total of the next generation AH-1Z Cobra attack helicopters and UH-1Y Huey helicopters.

The Department of the Navy plans to buy 10 F-35 Lighting II Joint Strike Fighters, split between 6 of the Marine vertical take off and landing variant and 4 of the carrier capable aircraft.

In the unmanned realm, there will be a year delay procuring the RQ-4 Broad Area Maritime Surveillance unmanned aerial vehicle due to software and design delays as well as reduction in acquisition of MQ-8 rotary wing Fire Scouts while the Navy evaluates the service’s needs.

The budget request may prove overly optimistic as the presentation comes among swirling uncertainty of federal fiscal stability while Congress and the Obama administration argue over the best way to trim the budget.

Secretary of Defense Chuck Hagel admitted as much in a briefing to Pentagon reporters on Wednesday.

“We are living in a world of complete uncertainty,” he said.