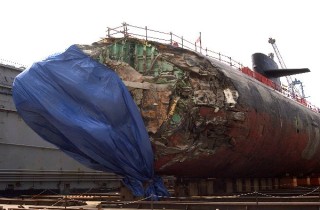 Duryea oversees the Navy’s SUBSAFE program, the series of rigorous checks in design, manufacture, and maintenance of the service’s nuclear submarine fleet— and the reason the San Francisco lost just one sailor. He died of head injuries.

“I’m not sure a non-SUBSAFE sub could have survived that,” Duryea said. “It’s my opinion the SUBSAFE program helped insure that ship was able to rejoin the fleet.”

San Francisco rejoined the Fleet in 2009.

SUBSAFE was born in 1963, just two months after mechanical failures resulted in the loss of USS Thresher (SSN-593).

On 10 April 1963, Thresher was unable to surface during a deep-diving test and was crushed before her wreckage came to rest more than 8,000 feet below the surface.

“It was the revelation that we had the best submarines in the world and at a relatively young age, the submarine was lost,” Duryea said. “As we went through the various investigations it was apparent that there were some significant holes in how we were doing business.”

The Navy created an elaborate series of checks in the design, construction and maintenance of nuclear submarines to certify a submarine would be able to surface in the event of an emergency. Certification gets as specific as cataloguing the source of the alloy for every piece of equipment that’s SUBSAFE approved, according to the Navy. That means the lot number on a SUBSAFE valve can be traced back to the source.

Jim Noonan, the SUBSAFE program director at General Dynamics Electric Boat in Groton, Connecticut, has been responsible for the program for 14 years.

As part of a regular training cycle, all employees at Electric Boat listen to the sounds of the USS Scorpion (SSN-589), a non-SUBSAFE boat, imploding underwater in 1968.

“No matter what you do at Electric Boat,” Noonan said, “you’re involved what the final product is.”

SUBSAFE lessons also extend beyond the subsurface world. Vice Adm. Kevin McCoy, commander of Naval Sea Systems Command, has kept a copy of the report that led to the creation of SUBSAFE on his desk for eight year.

It serves as “a constant reminder for when you’re making tough decisions and making decisions about material condition of ships,” McCoy told USNI News. “It has a very sobering effect. There are real lives here we’re talking about every day that a ship sails in the U.S. Navy.”