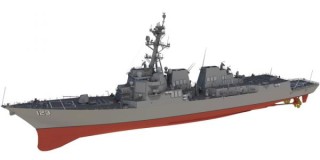 The Flight III DDG-51 is the planned successor to the current Flight IIA design and the planned landing platform for the Navy’s air and missile defense radar (AMDR).

Instead of Flight III, the memo recommended continuing to build Flight IIA DDGs, while moving to a large, ballistic-missile-defense-centric ship that would presumably house a larger, more powerful instantiation of the AMDR than is possible in the DDG-51 class.

If the Defense News report is accurate, I support the initiative wholeheartedly. Here’s why.

The first thing to recognize is that AMDR is an incredibly important program for the future of surface warfare. The current and venerable SPY family of radars resident in the Aegis weapon system has grown long in the tooth, and finds itself increasingly challenged by a sophisticated and proliferating series of missiles, of both the antiship cruise and ballistic variants (antiship and land attack). To pace the threat, AMDR must be fielded.

The question arises as to what platform would be most appropriate, and this is something the Navy has studied quite a bit in the past few years.

(I highly recommend those interested in a deeper understanding of these issues read Congressional Research Service Report RL32109, Navy DDG-51 and DDG-1000 Destroyer Programs: Background and Issues for Congress, 14 March 2013, authored by the irreplaceable Ron O’Rourke.)

The choice of many in the Navy is to create a Flight III DDG-51 variant to house the radar. Essentially, Flight III DDGs would have an entirely new combat system, built around AMDR and allowing each platform to perform simultaneous self-defense and theater ballistic-missile missions, something the current Aegis fleet is challenged to do. The problem is that AMDR will require notable increases in available power, as the sensitivity goals it seeks to meet are a function of both power out and the size of the array. As currently configured, the DDG-51 could not provide either the power required or the cooling capacity necessary to dissipate the heat created by a radar of this size and power. Second, the available real estate on a DDG-51 limits the size of the array available in a manner that sub optimizes the leap-ahead capability that the radar represents. Put another way, the current DDG-51 hull does not have enough power or cooling for AMDR, and even if it did, the room available on the superstructure is insufficient to the task of achieving tactically relevant radar performance.

The Navy’s answer has been to consider altering the DDG-51 in a way that would give it the power and cooling it needs for AMDR (and the power distribution system) while accepting that the array size is sub optimized. This is the Flight III. Some have suggested that a significant lengthening of the hull would be a Flight III feature, though specifics about the concept are not publicly available.

That plan is flawed on several fronts.

First, it is a blatant violation of CNO Greenert’s much touted “Payloads, not Platforms” approach. Once this ship is built—mostly by performing superhuman feats of engineering on an already crowded ship—there will be a limited margin (power, weight, cooling, displacement) for future upgrade. What the Navy buys is essentially what it will have for the life of the ship, with modest upgrades available through computer program refreshes and the like, but not the kind of upgrades available (theoretically) in a more modular design in which power, cooling, radars, and weapons, etc. are treated as commodities that can be swapped out when increased capability (payloads) is available.

Second, the Navy’s estimate (from O’Rourke’s report) of $2.3 billion in acquisition cost for the first Flight III is difficult to swallow, given the degree of risk associated with moving away from Aegis to a combat system incorporating AMDR. The Navy would have Congress believe that going from Flight IIA to Flight III is similar to that of going from Flight I to Flight IIA. I simply disagree. While there will be many components in common, the brain of Flight III would be completely different, as would its power distribution system (nervous system). All of that must take into consideration that at even this dramatically underestimated price, the Flight III still might not keep up with the most demanding threats it is likely to face because of the array size that can be accommodated. This brings up the question of whether “the juice is worth the squeeze.” I do not believe it is.

Third, our Fleet size is likely to shrink in the coming years, and Flight IIA is a ship we know how to build efficiently. Switching to a Flight III—with concomitant schedule, cost and technical risk—offers the potential to exacerbate the decline of our Fleet size at a time when the national strategy appears to be turning more and more toward a globally postured Navy.

Instead, the Navy should continue to build Flight IIAs—like the Air Force builds F-16s. It should build a limited number (6-10) of sizable BMD ships that would carry a large array variant of the AMDR and advanced interceptors. Candidate hulls include the LPD-17 and the DDG-1000. Those ships would be networked in with the cruiser-destroyer force, which would be equipped with advanced interceptors to create network-enabled distributed firepower. Add to that mix the Navy Integrated Fire Control (Counter Air) capability, and the fleet of Flight IIAs remains relevant to the overwhelming majority of threats it is likely to face, while being backed up by the powerful capacity of large array AMDR’s housed elsewhere.

AMDR is the key to the whole architecture, and shoehorning it into a technically risky, sub optimally sited platform (the DDG-51) makes far less sense than continuing to build the most successful ship type the United States has ever built (the DDG-51) as is, while concentrating on siting AMDR on a platform with growth margins to ensure it can continue to meet the threat in decades to come.

For a contrary view on the Flight III, see the following commentary from the January issue of Proceedings.