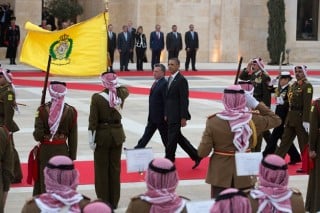 Israeli Prime Minister Benjamin Netanyahu’s strategic concerns for the “defensive boundaries” of Israel are clearly demarcated by geography. The distance between key locations in Israel and the West Bank are six to nine miles, with a huge concentration of the Israeli population on the coastal strip where most of Israel’s commercial and industrial life resides. His concern is that the West Bank provides a buffer area and site for defensive missile systems that will ward off an attack. The key to helping Netanyahu and the Israeli people find both peace and security lies with Jordan.

Jordan is the most stable political regime in the Arab world. King Abdullah leads a nation that is making progress in both democratization and improvement in the lives of the ordinary Jordanian, while providing bedrock security against outside extremist influences. Israel has to both respect and trust Jordan, and Jordan’s security against outside threats has to be underpinned by equal aid from the United States, just as the United States provides aid to Israel. The likelihood of a destabilizing and anti-Israel regime emerging in Jordan is very remote. The threats to Israel lie much farther to the east in Iran, and that country’s extremist associations with other state and nonstate players. By the same token Jordan is equally threatened by extremist groups from outside that would try to destabilize an otherwise progressive regime, with the vast majority of Jordanians loyal both to their political processes and their head of state.

Modern cruise and ballistic missile technology is such that the West Bank buffer zone is not relevant for Israel in terms of a ground invasion from the east, particularly given relationships with both Jordan and the underpinnings provided by the United States. The major threats to both countries, other than extremist attacks from terrorist groups, are most likely to come from missile attacks. The very worst scenario for Israel would be a preemptive ballistic-missile attack from Iran. In that and other missile scenarios the West Bank does is not a key geographic entity because of speed, times, and distance issues associated with the location of key targets in both Jordan and Israel if attacked by cruise and ballistic missiles. However, where the West Bank can play a role is in a layered defense network of defensive missile silos.

A settlement with Jordan over the West Bank can include the following. Jordan regains control of the West Bank and, with U.S. oversight, begins the management of both Palestinian and Israeli settlements in the area. In return Jordan should grant Israel several key sovereign airbase sites in the West Bank where Israel may have full rights, permanent access for its military to man 24/7 defensive missile batteries, and provide early warning radar systems. Such sites and systems will be of equal value to Jordan. In addition, the United States can provide two other key layers of defensive systems for both Jordan and Israel, in addition to what it provides under various aid agreements.

The one critical system that the United States possesses, which provides a mobile, flexible, and persistent presence in deterring and worst-case defending against ballistic missile attacks is the U.S. Navy’s Aegis missile system. The Navy has proved that the Aegis system not only works; it can be deployed to those sea areas where the time needed for responses in the event of ballistic-missile attacks is dramatically shortened by the flexible on-station positioning and employment of Aegis cruisers and destroyers. The United States can provide forward-deployed layered missile defense for both Jordan and Israel, and its NATO Allies in Europe, in the 5th and 6th Fleet AORs. In addition, the covert and persistent presence of the U.S. Navy’s attack submarines (SSNs) and cruise missile submarines (SSGNs) firing tactical Tomahawks against land-based missile targets is a formidable deterrent against aggressors whose missile locations, whether fixed, underground, or mobile, can be targeted in time scales that make preemption by an aggressor a very foolish strategic act. The United States therefore provides in the Persian Gulf and the eastern Mediterranean two critical layers of defense—the first layer and the last—and in between are the defensive systems provided by both Jordan and Israel. If an accord can be reached between Israel and Jordan on the above terms, underwritten by the U.S. government, then Jordan and Israel can move toward the next stage of creating an integrated joint common missile defense system. From Netanyahu’s perspective the issue of the strategic role of the West Bank has now taken on a whole new complexion, and one that guarantees Israeli access and presence for the above defensive systems.

Intelligence sharing is critical in the above agreements. Warning time is vital, and both Jordan and Israel will need to build confidence individually and mutually with the United States in order to share time-sensitive intelligence. Also needed, from the U.S. perspective, is a minimizing of deployment costs, except at times of rising tension in the region.

The above offers a long-term solution, and not just for the West Bank. The arguments are defused of both the extremists and the more moderate members of the international community, who see the ongoing crisis of the Palestinian situation as a running sore that foments not only discord within the civilized community of nations but also provides ammunition to those groups who wish to destabilize the Middle East by violent means.

The United States Navy plays a crucial role in making long-term peace in the Middle East a reality.