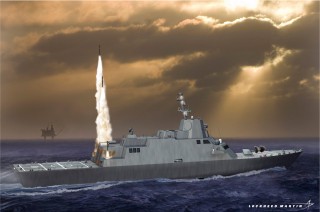 The commander of U.S. Surface Forces wants to look at a move to one design of the controversial Littoral Combat Ship and recommends a new large surface combatant to succeed the Arleigh Burke-class guided missile destroyers, according to a Sunday report from Defense News.

Vice Adm. Tom Copeman, commander of U.S. Surface Forces, submitted a classified memo late last year to Navy leadership recommending a second look at the Navy’s LCS strategy. “Vision for the 2025 Surface Fleet,” calls for an “up-gunned, multimission variant” or the current Freedom or Independence class LCS or a new type of ship, according to the report. The variants could resemble the Aegis-equipped variants of the LCS designs that were in consideration for a massive foreign military sales effort to Saudi Arabia.

When contacted by USNI News, Navy officials would not elaborate on the report.

In early March, the Navy exercised $1.5 billion in contract options to construct LCS-13 through 16.

Instead of Flight IIIs, “Copeman recommends creating a new, large surface combatant fitted with AMDR and designed with the power, weight and space to field ‘top-end energy weapons’ like the electromagnetic rail gun under development by the Navy,” according to Defense News.

The planned Flight III hulls would be built as the current Flight IIA models, according to Copeman’s recommendations.

In 2008 the service shelved a plan to construct an air warfare and ballistic missile defense cruiser with powerful radar that would replace the Ticonderoga-class Aegis missile cruisers. Estimated costs for the programmed ballooned to $6 billion a hull for a 20,000-ton combatant. The Navy deemed the ship unaffordable and instead elected to build a new iteration of the existing Arleigh Burke with the smaller Air and Missile Defense Radar. Still, the AMDR requires five times more power that the existing SPY-1D radars on the Burke and 10 time more cooling, according to a 2010 Naval Sea Systems study. The inclusion of the AMDR would limit the ability for the hull to accommodate future directed energy weapons or rail guns.

The report determined the radar would push the limits of the DDG-51s power and space requirements, pushing the cost to more than $3 billion.