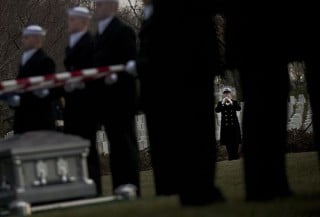 A member of the U.S. Navy Ceremonial Guard plays “Taps” during a funeral at Arlington National Cemetery on March, 8. US Navy Photo

The reduction in the cemetery’s budget will not result in civilian furloughs but could result in cuts to planned improvement projects, Condon said.

If the cemetery is subject to a yearlong Fiscal Year 2013 Continuing Resolution, the budget for Arlington will shrink from a planned $173.8 million to $45.8 million, according to the cemetery.

“Operating under a [yearlong Continuing resolution would eliminate the $103 million for expansion projects which would extend Arlington’s ability to bury our veterans, and the $25 million for critical infrastructure restoration and modernization,” Condon said.

The cemetery had planned for cuts to reduce funerals at the cemetery by 160 a month.