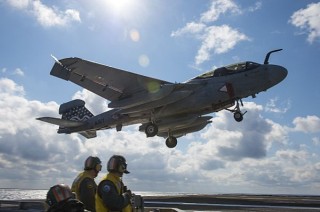 The Navy has identified the three sailors killed in a Monday crash of an EA-6B Prowler near Harrington, Wash.

The crew of the Prowler was attached to Electronic Attack Squadron VAQ-129 based in Naval Air Station Whidbey Island, Wash. The fleet replacement squadron served as a schoolhouse for new electronic warfare pilots flying the Prowler and the successor EA-18G Growler electronic attack aircraft.

The crew was on a low-level navigation mission when the plane went down. Electronic warfare pilots are trained to fly low to minimize their exposure to enemy anti-air missile threats.

The EA-6B is a carrier-based aircraft that specializes in jamming and destroying enemy air defenses and is flown by the Navy and the Marine Corps. The airframe has been in service since the early 1970s and is based on the A-6 Intruder.

It’s manned by a pilot and up to three Electronic Countermeasure Officers.

Prowler operations at VAQ-129 are currently suspended pending the investigation into the crash. The last set of Prowler pilots are set to complete flight training in mid-2014, reported the Navy Times. After that class the service will transition completely to Growler training.