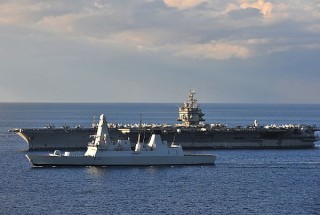 The aircraft carrier USS Enterprise (CVN 65) is underway with the Royal Navy Type 45 destroyer HMS Daring (D-32) in 2010. The US and UK are exploring integrating the Type 45 into US European ballistic missile defense programs. US Navy Photo

The United Kingdom is looking to get its latest destroyer into the ballistic missile defense (BMD) game, U.K. Ministry of Defence officials told USNI News on Thursday.

Through the U.K. Missile Defence Centre the MOD and the U.S. Missile Defense Agency will, “explore the potential of the Royal Navy’s Type 45 destroyers to conduct Theatre Ballistic Missile Defence (TBMD) missions,” read a statement provided to USNI News.

The MDA and U.K.’s MDC plan to test the Type 45s active electronically scanned array (AESA) Sampson radar in conjunction with U.S. Navy BMD patrols in Europe. The ultimate goal is to see if the RN’s systems work well with the current Aegis-equiped cruisers and destroyers currently providing BMD in the European area of operations, the MOD said.

“It will be a step change to be able to work so closely with such a ship in an emerging area of defense,” said Missile Defence Centre head, Simon Pavitt, in the release.
“Working with an operational platform will make a significant difference to our level of understanding and could contribute both financially and technically towards de-risking any future program.”

In the last several years, the MDA has cooperated with partner nations fielding the Aegis-missile system, a MDA spokesman told USNI News.

Australia, Japan and South Korea all field Aegis systems and have been involved in joint tests with the U.S. Navy and MDA to track simulated rogue missiles in the Pacific theater.

MDA would not elaborate on a timeline for testing with the U.K.

The first Type 45 destroyer, HMS Daring (D-32), was commissioned in 2009. The six ship-class is built around the Sea Viper missile system. The Sea Viper is composed of the Sampson radar, the Sylver missile launcher and Aster 15 and Aster 30 missiles.

Likewise, the Aegis missile system was originally designed as an anti-air weapon system but was adapted to target and intercept missiles by adding processing power and new hardware to ships’ systems.