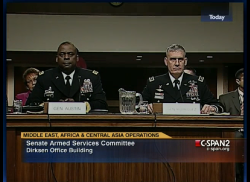 The Senate has confirmed two regional commanders, following delays, according to a Wednesday release from the Department of Defense.

Both Lloyd and Rodriguez testified in front of the Senate Armed Services Committee on Feb. 14. The confirmation was delayed over questions Sen. Lindsey Graham (R-S.C.) had for Austin over troop strength in Afghanistan.

“ ’I don’t want to block’ the committee’s vote, Graham told Austin during the nominee’s Senate confirmation hearing on Wednesday. But the South Carolina Republican made clear that any progress on Austin’s nomination hinges upon the general providing his assessment on the postwar plan to the panel,” reported The Hill.

Both nominees are expected to take over their new commands by the end of the month.