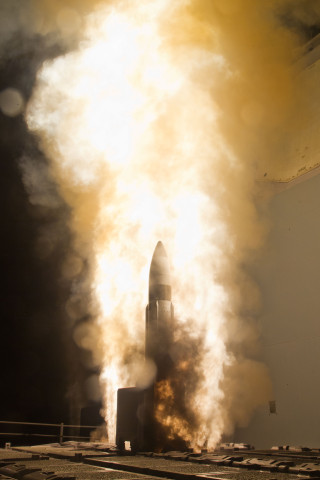 Lockheed Martin beat Boeing and Raytheon to win a $100.7 million contract to for five years worth of upgrades to the Aegis combat system, Naval Sea Systems Command told USNI News on Tuesday.

“Full and open competition allows the Navy to take advantage of these efforts to fulfill the Navy’s requirements,” Larson said. “The CSEA contract is a prime example of the Navy’s commitment to competition and providing cost effective solutions to the nation’s taxpayers.”

The competition saved the Navy a potential $120 million in costs for the program, Larson said.

The award will upgrade destroyers and cruisers equipped with the missile system with the software and engineering upgrades called Advanced Capability Build 16. ACB-16 will include upgrades integrate the MH-60R helicopter into Aegis as well as improve awareness for the platform, Lockheed Martin spokesman Keith Little told USNI News on Tuesday.

The new program will follow Aegis Baseline 9 (formerly ACB-12) in upgrading the air and missile defense software on the Arleigh Burke-class and Ticonderoga-class Aegis ships in the U.S. Navy.

Lockheed Martin has been the prime contractor for upgrades to the missile system since it acquired Martin Marietta in 1995. Martin Marietta acquired the system from General Electric which bought RCA – the original 1960s developer of Aegis.

Aegis began as a counter to Soviet missile systems and has evolved into a ballistic missile defense (BMD) scheme. Aegis BMD-capable ships make up the current backbone of the 2009 European Phased Adaptive Approach missile defense strategy.