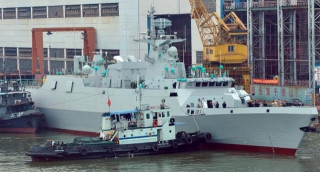 The first 056 class No. 582 was officially handed over to PLAN on Feb. 25 as Wu Shengli, Commander of People’s Liberation Army Navy (PLAN) personally came to inspect the ship. While it is referred to as light frigate by Chinese news, the ship should be classified as a corvette or offshore patrol vessel (OPV) based on its size and displacements. This class is expected to be the next mass produced PLAN shipping class.

The type 056 class fills the gap between the 4000-ton 054A class frigate and 220-ton 022 class FAC. As of now, at least nine other 056s have already been launched by the four shipyards building them. The overall number of this class is expected to be between the final count of 054A (probably around 20) and 022 (around 80). They are expected to replace the 10 Type 053 class Jianghu frigates currently serving in the South China Sea Patrol flotilla and the close to 50 Type 037 class missile boats.

In many ways, the type 056 hull is based on the Pattani class OPV that China built for Thailand from 2005 to 2006, although more signature reduction work is done such as the shielding of the funnels. Currently, 056 is equipped with four YJ-83s anti ship missiles and a AK-176M naval gun for surface warfare missions (SUW) along with a eight-cell HQ-10 surface-to-air missile system, and two automated new single 30-mm barrel close-in weapon system for self defense. Although the first few ships are not fitted with a towed array sonar, the system could provide some support for near sea anti-submarine warfare missions (ASW) with a helipad large enough to hold Z-9C (and possibly Z-15 in the future), appearance of bow sonar bulb and six torpedo tubes installed in what looked to be the hangar. Most likely, the earliest 056 units will be used to replace Type 037s in the Hong Kong garrison and green water patrol missions. I expect a good number of Type 056 to eventually be used to patrol the disputed areas in South China Sea. Compared to the ships it is replacing, Type 056 requires a third of the crew size of Jianghu class while offering more punch and similar endurance. Compared to Type 037, it should have better endurance, sea keeping and far stronger SUW and anti-aircraft warfare capabilities. It should be able to handle the naval threats from neighboring countries like Vietnam, Philippines and Thailand. The goal is to free up larger ships like the Type 054A class and Type 052C/D class for blue water missions. In the future, I could also see ASW variants of Type 056 replacing the Type 037 sub chasers and more dedicated patrol versions of Type 056 with hangar large enough to hold two S-100 size unmanned aerial vehicles.