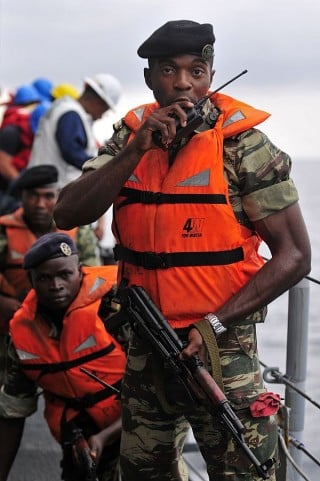 Pity the Somali pirates, who after an abysmal year in 2012, have only managed to (unsuccessfully) attack two vessels thus far in 2013. Piracy is now much more lucrative in West Africa, where there have been at least 10 reported attacks in the past month alone. In the waters of Nigeria, a dozen mariners from three separate vessels were kidnapped by pirates during a single 10-day period. Côte d’Ivoire had never witnessed the hijacking and large-scale robbery of an oil tanker before October 2012, but already has had two such vessels pilfered from its waters this year.

Getting the Numbers Straight

As West African piracy receives increased media attention, it is almost always reported that a “new” piracy epicenter has “emerged” in Nigeria and that the criminal enterprise is now increasing and expanding across the Gulf of Guinea. Those types of statements are an oversimplification, however, and mask the complexities and evolution of maritime crime in West Africa.

To begin with, piracy, kidnapping, and oil theft are by no means “new” to the region, as a multitude of criminal actors have parasitically operated in the Nigerian littoral since the country’s oil boom in the 1970s. To say that the country has “reemerged” as an epicenter of maritime crime is more accurate, as it was only in 2007 that Somali waters became more prone to piracy than those of Nigeria.

One must also be careful about reporting an absolute “increase” in the total number of pirate attacks that have taken place in West Africa over the past year. International Maritime Bureau (IMB) figures display an increase from 2011 to 2012, but these numbers are incomplete as they include only incidents directly reported to the IMB, whereas an estimated 50%-80% of pirate attacks go unreported.

The larger data set of the Danish consultancy firm Risk Intelligence reveals a decrease in Nigerian piracy. The expansion of pirate gangs into the waters of neighboring states explains why attacks may have decreased in Nigeria, but it is also noted that the total figure for West African waters has fallen from 116 in 2011 to 89 in 2012.

An overall decline in the total number of pirate attacks in the Gulf of Guinea does not mean that the problem is being a solved, a fact to which the recent string of attacks attests. Rather, the region is now witnessing an evolution in maritime crime, as Nigeria-based syndicates are able to mount increasingly sophisticated operations that focus on fewer targets of higher value across an expanded geographical area. 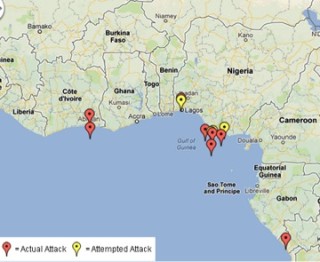 The large-scale theft of refined petroleum now occuring in the Gulf of Guinea did not first emerge in Nigerian waters, but in those of neighboring Benin. The first such incident occurred on Chistmas Eve 2010, when the Italian tanker Valle di Cordoba was hijacked off the port of Cotonou and forced to steam to an undesignated position where its cargo was discharged into a smaller vessel. This modus operandi proved to be successful, as at least another 20 vessels were attacked in Beniois waters the following year. Attacks off Cotonou suddenly decreased in 2012, but the same pirates appeared in the waters of Togo, where they attacked 15 vessels in a single year. For 2013, the piracy hotspot is likely to be the waters of Côte d’Ivoire, where there have already been four tanker hijackings in last five months.

In terms of target selection, attacks against support vessels operating close to shore have declined, while those against oil tankers carrying refined product have surged. A recent report from the U.N. Office on Drugs and Crime (UNODC) notes that 23 of the 24 attacks recorded in Benin in 2011­–2012 involved chemical or product tankers. A similar profile is evident in Togo, where 15 of the 18 recorded attacks in the past two years involved tankers carrying refined product. The pirates’ preference for tankers is a matter of simple economics. A full cargo of refined petroleum is worth about $5 million and can be quickly sold on a regional black market facilitated by “oil mafia” insiders.

While boarding a supply vessel and robbing it of valuables is a relatively low-tech affair, hijacking a product tanker and pilfering vast quantities of fuel over several days requires a high degree of organization and sophistication. The confessions of four captured pirates, believed to be behind the hijacking of the Energy Centurion off the coast of Togo on 28 August 2012, reveal the intricacies of such an operation.

According to one portion of testimony, criminal syndicates are “sponsored by powerful people,” including Nigerian government officials and oil-industry executives, who provide advance payment and information about the cargo, route, and security details of ships that have been targeted. These intelligence-led operations have become increasingly multinational with gangs based in Nigeria planning attacks off the coasts of Benin, Togo, and Côte d’Ivoire, often with the assistance of nationals from these countries.

Once a vessel has been hijacked, pirates have been known to go to great lengths to make sure that the ship “disappears” while preparations are made to offload the cargo. For example, the gang that hijacked the product tanker MT Anuket Emerald made sure to damage all the ship’s communications equipment and loading computer, repaint its funnel, apply a new name to the vessel, and remove its IMO number.

The West African modus operandi is also more secure, as Nigerian pirates are not subjected to the same risks as their Somali counterparts—namely extended voyages in treacherous open ocean, the combined pressure of the world’s greatest navies, and the widespread use of professional armed guards aboard merchant vessels. Endemic corruption in Nigeria ensures that even if pirates are caught, they are unlikely to face serious consequences. The Nigerian Maritime Administration and Safety Agency and Joint Task Force have made dozens of arrests in recent months, but lack the authority to detain or prosecute suspects, as that is the responsibility of other security agencies. Bribes to these agencies, captured pirates note, are set aside as an operational expense, meaning most suspects are released without being charged.

In terms of numbers, overall pirate attacks may be declining in the Gulf of Guinea, but the gangs responsible appear to have increased both their operational sophistication and target selectivity. Given the increased value of each operation and the small risk of punishment their crimes show no signs of disappearing.

For more information on Gulf of Guinea, see Africa’s Leaking Wound in the current issue of Proceedings.