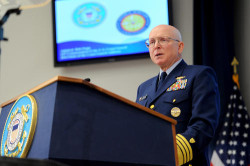 The U.S. Coast Guard will attempt to preserve its workforce in the face of wide-ranging budget cuts, Commandant Admiral Robert Papp said Wednesday following his annual State of the Coast Guard address in Washington, D.C.

“We want to hold our entire workforce because we’ve worked very hard in the last decade to build our force back up,” he told reporters following the address.
“So whether it’s active duty or our civilian workforce, we will make every effort to keep our workforce intact.”

As an arm of the Department of Homeland Security, the Coast Guard has a modest budget of $8 billion, compared to the combined $600 billion of the other armed services. The service has not released its budget plan ahead of the Friday deadline for the sequestration cuts that will be applied throughout the federal government.

The Coast Guard has been in consultation with Homeland Security Secretary Janet Napolitano to finalize the plan, Papp said.

“I have ideas of what the impacts might be but right now I’m waiting to see what happens,” Papp said. “There will be fewer aircraft hours, fewer boat hours, fewer cutter hours. I can’t tell you exactly where those will be. We never do a 100 percent of the missions the country gives us all of the time because we don’t have the resources to do a 100 percent. Whatever resources we have we apply them to the highest priorities.”

In addition to sequestration, Papp previewed a new Arctic policy for the Coast Guard.

“In September we observed the lowest sea ice extent in recorded history and there are vast areas of open water where there used to be ice,” Papp said in his address.

“As the receding ice increasingly gives way to commercial ventures and human and economic presence increases, so do our responsibility.”

Activity in Arctic is seasonal, and instead of building shore assets, the Coast Guard would rather have cutters patrol the region as the Arctic opens up.

“I’ve been a proponent of assets like that National Security Cutter that can deploy during times of activity,” Papp said. “That will get us through for the next couple of decades. The Coast Guard can’t afford to build this infrastructure. It has to be something that the country sees a need for.”

Papp also addressed procurement. The start for the sixth National Security Cutter is being delayed by the Continuing Resolution as well as the long lead materials for the seventh. The Coast Guard is also expected to announce the three finalists for the new Offshore Patrol Cutter program in the next few months.

Under the specter of budget reductions the Coast Guard has to reduce the amount and types of mission the service undertakes, Papp said.