The following is a statement from Department of Defense Spokesman George Little. The Pentagon released the statement after former Nebraska Senator Chick Hagel was confirmed by the Senate as the Secretary of Defense on Tuesday. 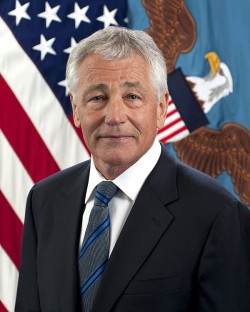 Following the confirmation vote in the Senate, Senator Chuck Hagel received congratulatory phone calls form Secretary Panetta, congressional leaders, and Secretary Shinseki. In his conversation with Secretary Shinseki, the Senator indicated his desire to meet as soon as possible to continue and deepen the strong partnership between the Department of Defense and the Department of Veterans Affairs on common priorities for serving our troops, veterans, and military families.

Below is guidance on Senator Hagel’s first day as Secretary of Defense:

At 7:30 a.m. EST, Senator Hagel will arrive at the River Entrance of the Pentagon. His arrival is open press.

At 8:15 a.m. EST, Senator Hagel will take the oath of office in a private ceremony attended by family members and his immediate office staff. Senator Hagel will be sworn in by the Director of Administration and Management, Michael L. Rhodes. The ceremony is closed press.

Secretary Hagel will then host the daily senior staff update meeting attended by civilian and military leaders of the department.

At 10:30 a.m. EST, Secretary Hagel will make remarks to service members and civilian employees of the department in the Pentagon Auditorium. His address is open press and will be covered live on the Pentagon Channel. Still and video photographers should arrive no later than 10 a.m. to pre-set.

In the afternoon, Secretary Hagel will meet with the Service Secretaries and attend meetings at the White House.