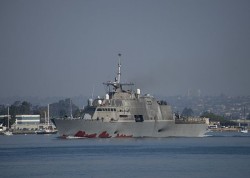 The Director of U.S. Navy Staff is recommending to service leadership to extend the life of the council of admirals appointed to oversee the development of the Littoral Combat Ship (LCS) program, he said in a letter obtained by USNI News on Friday.

The senior level focus on the ships and their accompanying mission packages, “has had positive impact through out the LCS program . . . I highly recommend the LCS council remain in place to monitor and provide oversight,” wrote LCS council leader Vice Adm. Richard Hunt.

The four-admiral panel was established in August to provide additional oversight to the LCS program following several internal Navy reports that called into question original manning and maintenance assumptions of the ships, Navy officials said at the time.

In the first five months the council has overseen changes to manpower, training, maintenance and concept of operations for the LCS program, Hunt wrote.

Some changes include expanding the core crew of 40 sailors on USS Freedom to 50 for its planned March deployment to Singapore as a test some of the manning assumptions of the ship.

The council also developed a Plan of Action and Milestones (POAM) program for LCS. In addition to the POAM, the council has also identified additional focus on the LCS’ mission modules, seaframe modification based on commonality and reliability reviews and planned review of Freedom’s initial deployment when its returns.

“Challenges remain for the LCS program,” Hunt wrote. “But there are great opportunities.