Tuesday, the Center for New American Security annouced that Under Secretary of the Navy Bob Work would become its new Chief Executive Officer in April. While in office, Work has been a contributor to U.S. Naval Institute’s Proceedings magazine with an eye toward the big picture of the worldwide naval future.

Hitting the Beach in the 21st Century
November, 2010 Proceedings
by Under Secretary of the Navy Robert O. Work and Lt. Col. F.G. Hoffman USMC (Retired) 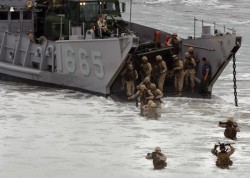 As adversaries and weapons grow more advanced, amphibious doctrine must evolve, and the Navy—Marine Corps team must keep the blade sharpened for sea-to-shore capabilities.

Last May, at the Navy League’s annual Sea, Air, Space conference, Secretary of Defense Robert Gates offered his perspective on the challenges facing America’s Sea Services in the decades ahead. Many in the audience and those who later read his speech focused on his comments about the current cost of the Navy’s carriers and other surface ships, and the future cost of its strategic submarines.

The Coming Naval Century
May, 2012 Proceedings
by Robert O. Work

The Navy and Marine Corps will be the long arm of a National Fleet central to U.S. military power. With the protracted campaigns in Iraq and Afghanistan either already complete or winding down, 25 years of sustained, high-tempo military activity will soon come to a close. Frankly, our all-volunteer joint force, which has given so much to the nation, is tired. The force—its platforms, equipment, and personnel, including families—needs time to recover, reset, reconstitute, and prepare for future challenges.