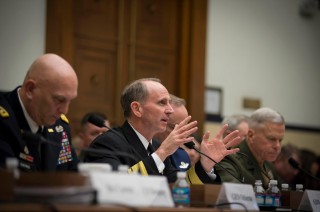 Today I testified before the House Armed Services Committee to outline the readiness impacts of sequestration and the lack of an appropriations bill. The following is my opening statement:

Chairman McKeon, ranking member Smith, and distinguished members of the committee, thank you for the opportunity to testify today.

When I last appeared before you, I declared that two important qualities of our naval forces are: they will be ready when it matters; and they will operate forward where it matters at the maritime crossroads of the world. And this remains our mandate. Your Navy and Marine Corps are uniquely qualified to respond immediately to crises, to assure allies, to build partnerships, to deter aggression, and to contain conflict. But most of these qualities and their value are at great risk by the fiscal uncertainty we now face.

Although our primary concern with sequestration and the lack of an appropriations bill is the impact they have on the readiness during this fiscal year, make no mistake it will have an irreversible and debilitating impact on Navy’s readiness through at least 2014. We will not be able to respond in the way the nation has expected and depended. We should make that kind decision consciously and deliberately.

Three symbolic but not all-inclusive examples of the impact are: the delay of the deployment of the Harry S. Truman, the delay in overhaul of the Abraham Lincoln, and the delay of initial construction of John F. Kennedy. These were not inconsequential decisions, or the only decisions we have had to make, or that we are going to have to make over the coming weeks. They did not come without significant consequences to our people, to the defense industry or to local economies. Impacts of funding we realign today cascade into future years.

The $8.6b shortfall confronting us in operations and maintenance has compelled us to cancel ship and aircraft maintenance, reduce operations, curtail training for forces soon to deploy, and plan for the furlough of thousands of civilians. These actions enable current missions of forces forward-deployed, but subject to congressional action, we’ll have inadequate surge capacity at appropriate readiness- to be when it matters, where it matters.

We ask that Congress act quickly to replace sequestration with a coherent approach to deficit reduction that addresses our national security interests. We need an appropriations bill for this fiscal year that allows the department to allocate resources in a deliberate manner. Without these actions, the condition and expected service life of our ships and aircraft will further degrade. Our Sailors will not be proficient and will not be confident to do the job. We will be forced to cancel or slow procurement of relevant platforms and systems needed to preserve our warfighting superiority, such as theJoint Strike Fighter, the P-8 maritime patrol aircraft, the littoral combat ship — all these and more will be in jeopardy.

Mr. Chairman, I know you are dedicated to the men and women of our military and their families. But our folks are stressed by the uncertainty about their jobs, their operational schedules and more importantly their futures.

I appreciate the opportunity to testify on their behalf and I thank you in advance for your efforts — and that of this body — in trying to avert the very real readiness crisis we face today. Thank you.