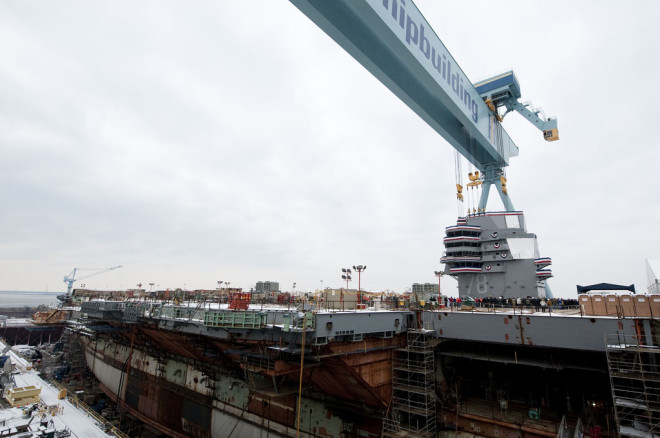 Rumors of deferred spending, civilian furloughs, and contract terminations have become the norm around the Pentagon. Program offices and contractors alike are preparing for what Secretary of Defense Leon Panetta calls “the meat axe”—mandatory, across-the-board spending cuts required under the BCA. Complicating the situation are current spending levels, which were carried over from last year and expire near the end March. DOD desperately needs relief from both.

The department has been operating at or below FY2010 levels for more than three years and essentially has operated on a Continuing Resolution (CR) for the last two years. Such flat-funding has left DOD with a long backlog of deferred or underfunded projects, and, when combining the recent spending profile with voluntary cuts already taken, the ledger is quickly filling with red ink.

As legislators examine their options for solving this latest fiscal dilemma, DOD and the services are looking at how they will cope with heavy-handed cuts that will begin in April.

Not All Cuts Are Created Equal
In Navy accounts, the combined impact of budget cuts and sequestration are already beginning to affect operations and, if allowed to continue, would force swift and, in some cases irreversible, reductions. Under the current CR, the Navy has already begun absorbing $4.6 billion in cuts and, with the sequestration trigger, another $4 billion in cuts would be required. Internal Navy deliberations have produced a list of cuts already under way, ranging from the seemingly immaterial to what they call “egregious” and “irreparable,” and these most severe cuts hit some of the Navy’s biggest hubs.

Navy maintenance accounts are taking some of the deepest cuts. According to internal Navy guidance, the CR will force the cancellation of all aircraft and ship maintenance beginning in April. Practically speaking, the cuts would mean canceling 10 ship maintenance availabilities in San Diego, 10 in Norfolk, Virginia, and one each in New London, Connecticut; Mayport, Florida; and Bremerton, Washington. Of the 23 maintenance availabilities set to be cut, 15 are for maintenance on Arleigh Burke-class destroyers, including the 22-year old second ship in the class, the USS Barry. Deferring the maintenance saves $604 million this year and canceling procurement of one destroyer this year yields an additional $1.4 billion.

Other ship and aircraft procurement accounts are also being reduced. Construction of the first Gerald Ford-class aircraft carrier will be further delayed by a $608 million cut and another $150 million comes out of aircraft buying accounts.

Facilities are also beginning to see the immediate impacts of the CR. The Facilities Sustainment, Restoration and Modernization accounts are being cut in half, meaning $1.14 billion needed for facilities work will be deferred. Another $363 million is coming out of Base Operations as well. Military construction projects are being delayed at Naval Air Stations Oceana, Virginia; Point Mugu, California; Whidbey Island; and Jacksonville. Also: Norfolk Naval Shipyard; Naval Surface Warfare Center Dahlgren, Virginia; Naval Weapons Station Seal Beach, California; and Naval Base San Diego. Another 30 buildings scheduled for demolition this year will remain on the books.

The labor force will also take a hit. According to the Navy’s pre-decisional slides, 1,121 temporary workers will be laid-off Navy-wide beginning in two months. Other service-wide cuts are also in effect. The Navy’s information systems account is down to 75 percent of its regular operating budget. The Navy Expeditionary Combat Command (NECC), charged with manning, training and equipping some 40,000 personnel, is taking a 20 percent cut. The NECC includes the Navy’s riverine forces, EOD, Seabees and port security forces.

Among the list of additional cuts that the Navy calls “acceptable,” or easy to reverse in the near-term, are reductions in Navy advertising, fully implementing a civilian hiring freeze, reductions to non-essential travel, delays to ship decommissioning activities and delaying civilian pay raises. Still, some of these measures become “difficult” to sustain or reverse, according to the Navy.

Sequestration would pile onto these cuts, directly affecting deployments and overseas operations, Navy charts say. According to internal projections, impacts under sequestration, which they call “Tier Bravo cuts,” would be severe and ripple throughout the sea service.

If the sequestration trigger occurs, “several SSN deployments” will be canceled, all non-missile defense deployments to Europe would also be canceled, and all naval operations in South America would cease. Flying hours on deployed carriers will be slashed by 55 percent. Among the Navy’s carrier air wings, four will need to shut down all flying activities by the end of March. Both the Harry S. Truman (CVN-75) and the Dwight D. Eisenhower (CVN-69) Carrier Battle Groups (CBG) will have their deployments indefinitely extended, while the Nimitz (CVN-68) and George H.W. Bush (CVN-77) CBGs remain unable to meet their scheduled deployment dates later this year.

According to the Navy, the impacts of the CR and sequestration will mean that only one carrier battle group and only one amphibious battle group will be crisis-ready should a contingency arise. The Navy slides also say that U.S.-based forces will take at least nine months to deploy because of delays in personnel training and ship maintenance. By the middle of next year, only one CBG will remain deployed to the Middle East, despite growing instability in the region. Maintenance already under way on the fast attack submarine USS Miami (SSN-755) will be delayed, as will repairs to the sub USS Montpelier (SSN-765) and destroyer USS Porter (DDG-78), meaning all three will remain unfit for service.

Exercises, partnership activities, port visits, a deployment by USNS Comfort (T-AH-20)and other so-called “good will” operations will be curtailed. At home, tuition-assistance programs and community outreach will also halt. Furloughs of civilian employees could begin as early as April.

Solution Set
Options available to the Navy are limited as it attempts to shuffle funds in the next three weeks to cover pressing needs that could last months. At the beginning of March, the Navy’s authority to transfer funds expires and sequestration hits DOD lines across the board if Congress doesn’t act to prevent the sequester.

Congress also has few options for solving the crisis. Lawmakers could move ahead with a combined package outlining spending levels for the remainder of FY13 and cuts that would de-trigger sequestration, solving both fiscal emergencies. That avenue seems the least likely given the current state of play in Washington.

Congress could also take the two issues separately, dealing first with the sequestration trigger and later with spending levels. Under that scenario, the resulting appropriations package would almost certainly serve more as a formality since the spending cuts needed to de-trigger sequestration would set de facto spending levels for FY13. Even if Congress offered modest increases to DOD’s top line, the Navy and Marine Corps will not be able to afford their current maintenance and investment needs, but avoiding the so-called Tier Bravo cuts would allow the Navy to maintain its global presence.

Congress could also choose to do nothing, delaying further the sequestration cuts and extending the current CR for the remainder of FY13. That seems like the most likely scenario given the current political environment, but additional delaying tactics on the sequester could have wide-ranging economic impacts beyond the DOD budget. The continuation of flat spending levels could also further hollow Navy aviation and shipbuilding programs and threaten the nation’s ability to project force around the world. At this stage in the fiscal debate, the status quo ante is simply unsustainable.