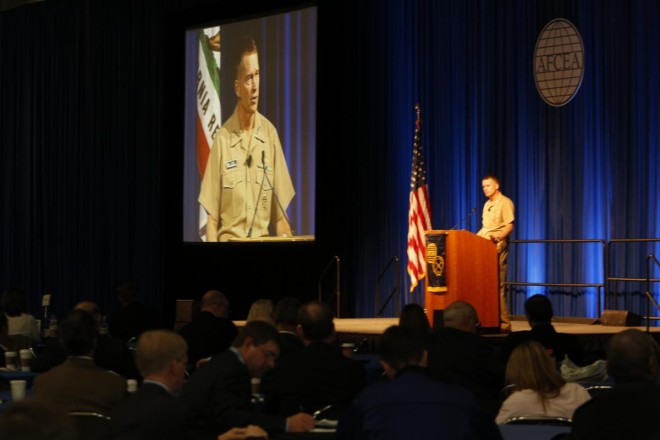 “We’ll only be able to cover the conflicts we are in and respond to the highest of the high national security interests,” Winnefeld said. “There could be for the first time in my career instances where we may be asked to respond to a crisis and we will have to say that we cannot.”

The military, Winnefeld added, “is in serious risk of rapidly sliding into a hollow force.”

Sequestration, part of a compromise spending bill reached by Congress and the White House nearly two years ago, was supposed to take effect on Jan. 1 when the nation faced a so-called “fiscal cliff” of across-the-board tax hikes and spending cuts. A tax deal was reached, and sequestration was delayed for two months as part of that bargain.

But time is running out for Congress to again address the military’s biggest domestic concern.

“There are no easy solutions for us to deal with,” said Vice Adm. John T. Blake, Deputy Chief of Naval Operations, during a panel discussion following Winnefeld’s remarks.

“I know of know other time that we have come down this far this fast in the defense budget,” Winnefeld said on Tuesday. “Our world is about to change. We’re going to have less money.”

Winnefeld said further savings could come through the “potential cancellation of maintenance capabilities for ships,” a number he said could reach 30 this year. Furloughs “that would affect the vast majority of our 800,000 DOD civilians” are expected, and a hiring freeze is possible.

If sequestration goes into effect, however, furloughs would cover just one-ninth of the further savings needed. Winnefeld called it a $5-billion fix to a $46 billion problem.”

Winnefeld said private industry must play a critical role in cutting costs. Winning bidders for various contracts “will not only hold the line on costs, but attack it.”