Sean Stackley, Assistant Secretary of the Navy for Research, Development & Acquisition (RDA), discussed some of the technology developments of the OR that will allow the boat to complete its service life without undergoing a midlife refueling that will translate into reduced ownership cost of the OR boats and making the boat more affordable from initial designs. 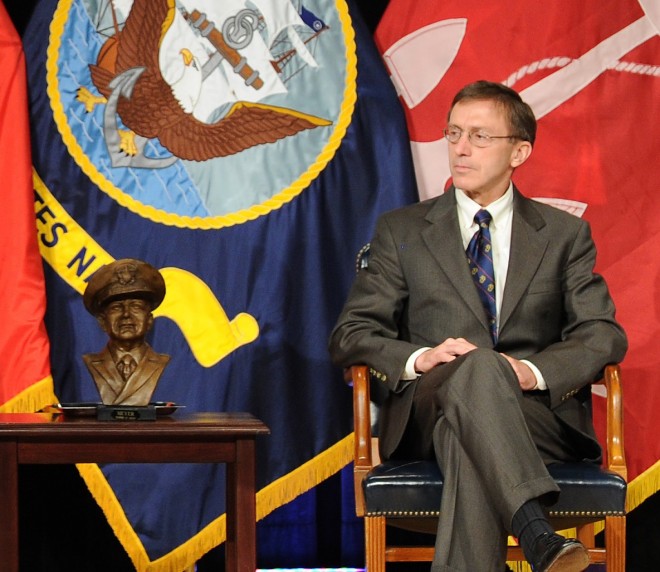 How is the Navy balancing the requirements versus the cost for the OR?

We spent a lot of time in drafting a capabilities document understanding what the costs of the respective capabilities of that boat would be and making trades to ensure the affordability of the boat was with in our reach.

The AOA went off and looked at a number of variants to support the mission and priced those out and the results of the AOA were used on the front end in making requirements decisions. But there were subsequent trades in capabilities and requirements that were necessary to bring the estimates for procurement of the OR within what we consider to be affordable.

The Ohio Replacement’s displacement looks to be 1,000 tons heavier than the current Ohio but has fewer missile tubes. Is that displacement difference all due to the new electric drive?

We are very early in the design process. The parameters, the submarine’s parameters are continuing to move around as the design concepts mature. When you say it’s heavier the submarine’s displacement is going to match its principle dimensions. So in the case of the OR, one of the design considerations is going to electric drive as well as a new reactor plant. That does drive some length consideration for the boat. That does bring its displacement up. It’s not so much the weight of the electric drive plant as the configuration that it brings with it.

The reactor plant: There is investment in the front end in the reactor plant to arrive at a core that will last the life of the boat. That’s important because what that does is effectively eliminate the midlife refueling associated with the current Ohio class and by eliminating that midlife refueling you effectively get greater operational availability out of the boat. Fewer boats are able to meet the strategic deterrent mission requirements.

So we don’t have this extended block of time in the life of the class where they are going heel-to-toe through refueling overhauls. There are still going to be midlife upgrades but the refueling portion is effectively eliminated which allows us to reduce from today’s 14 Ohios to reduce down to 12 Ohio Replacements. That’s a significant cost improvement over the life of the program at the expense of development for that new reactor-plant design.

It is a critical development in order to bring the current 14-boat class down to 12.