First, in December 2008, one replenishment ship and two warships departed China for a yearlong deployment to escort and protect merchant ships from piracy in the Gulf of Aden. Since then the PLAN has successfully deployed eleven task forces (28 warships) and more important, sustained maritime operations away from China’s mainland. The deployment of those warships has allowed the PLAN to develop specific training, tactics, and procedures for far-seas operations. One of those developments is the ability of PLAN warships to execute convoy and escort operations. Early in 2012, the PLAN completed its 450th escort mission; since 2009, a total of 4,640 Chinese and foreign ships have been escorted with a 100 percent success rate.[3] Additionally, that mission allows PLAN to exercise command-and-control functions, conduct maneuvering with merchant ships, and become proficient in satellite communications. Those are just a few examples of the many core competencies developed during each task-force deployment. 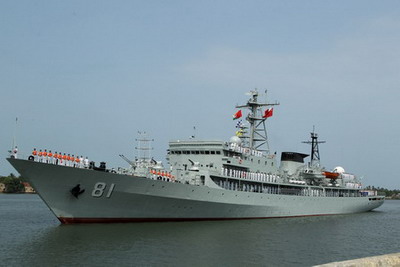 The convoy and escort mission should not be overlooked. Convoy and escort operations are a tangible skill that a naval force can build on as it grows in size and improves operational proficiency. The PLAN’s daily interactions with the Chinese merchant fleet also allow for continuity of operations in war or armed conflict. The U.S. Navy successfully completed that mission during World War II by escorting the U.S. merchant fleet across the Atlantic.

Second, the PLAN has demonstrated operations away from China’s mainland in an effort to potentially make a leap beyond the second island chain into the western Pacific. In April 2010, the PLAN deployed a flotilla of ten warships to include logistics ships and Kilo-class submarines in the Philippine Sea.[4] The flotilla was monitored by Japanese Maritime Self-Defense Force (JMSDF) warships and included a close encounter with a PLAN helicopter closing within 300 feet of a Japanese warship.[5] More important, the exercise displayed PLAN’s capability to refuel at sea to sustain operations over several days. In June 2011, the PLAN repeated the exercise with a flotilla of eleven warships in the Philippine Sea. Additionally, the Japanese reported that an unmanned aerial vehicle (UAV) was launched from one of the PLAN warships.[6]

Some analysts disagree that the exercises in the Philippine Seas suggest anything new regarding the PLAN’s open-ocean capability. Drew Thompson, then-director of China Studies at the Center for the National Interest in Washington, D.C., commented in 2010, “These PLAN exercises certainly demonstrate expanded capabilities, or at least the willingness to exercise the hardware they have more vigorously, but it should be viewed as part of a continuum rather than a departure from a previous period of development.”[7] One fact is beyond debate, however: the operations in the Philippine Seas, as well as the Gulf of Aden, demonstrate an ability to simultaneously sustain and expand the PLAN’s reach in two vastly different oceans—no small feat.

Third, the PLAN hospital ship Peace Ark completed deployments in 2010 and 2011 called “Harmonious Missions.” The first deployment was to the Indian Ocean for almost 90 days. Peace Ark provided medical treatment to those naval personnel serving in the Gulf of Aden as well as civilians in Djibouti, Kenya, Tanzania, the Seychelles, and Bangladesh.[8] The second deployment spanned 105 days in Latin America and included visits to nations such as Costa Rica, Cuba, Jamaica, and Trinidad and Tobago.[9] Peace Ark provided free medical treatment and issued public statements that the officers and men of the Peace Ark, “swear to be peace messengers.”[10]

Fourth, the PLAN ship Zheng Hu completed a worldwide training mission—“harmonious mission-global voyage”— with more than 300 naval cadets on board.[11] The mission, according to the deputy chief of staff for the Chinese Embassy in India, was to “implement our leaders’ important strategic thinking of building a ‘harmonious world’ and a ‘harmonious ocean’, carry forward Zheng He spirits of exploring the ocean and enhancing friendship, meet the needs of navy’s transformation for the future and cultivate cadets’ overall capability.”[12]

The PLAN mission to train future naval leaders aboard Zheng He is quite different from training at the U.S. Naval Academy or other commissioning sources. In the United States, naval midshipmen typically deploy for a couple of months on board a warship during a summer, but do not receive the level of training that comes with long-term operations around the world as part of a dedicated deployment. The PLAN’s unique training regimen provides a useful vehicle for their future leaders to learn both diplomacy and seamanship. More important, the mission teaches a critical skill no longer practiced extensively in the U.S. Navy: celestial navigation.[13] This skill, which some consider passé given the reliability and availability of GPS, presents some genuine tactical benefits in environments where satellites have been denied or low navigational sensor emissions are desired, two scenarios that some believe could occur in the unlikely event a broader conflict emerges in-theater.

Of the four operations, those in the Gulf of Aden and Philippine Sea demonstrate a significant capability for a rising maritime nation: logistical sustainment at sea. While there are a number of indices China watchers might use to gauge the PLAN’s future intentions (improved weapons systems, carrier aviation, etc.), historian and theorist Milan Vego says “logistical support and sustainment are perhaps two of the most critical factors for the success of a campaign or major operation.”[14]

Right now, the PLAN has only three replenishment ships dedicated for far-seas operations and any new shipbuilding to increase those numbers is publicly unknown. If the PLAN did indeed begin to establish a truly global naval force in late 2008, the next logical step in modernization may derive from two future developments. First, the buildup of logistics ships for refueling and replenishments at sea. Second, the establishment of agreements with host nations for permanent logistics bases to support naval operations. Today, the PLAN is far from matching the operational and logistic strength of the U.S. Navy. Yet as the PLAN continues modernization efforts to expand operational capability, Chinese advancements in logistics and sustainment could become a strong leading indicator of the PLAN’s global ambitions in the future.

11. “Ambassador Zhang Yan Welcomes Chinese Navy Training Vessel ‘Zheng He’ to visit India,” Embassy of the People’s Republic of China in the Republic of India, 12 May 2012, http://in.china-embassy.org/eng/zywl/t932148.htm and News Article with Zheng He deployment eturn citing forthcoming